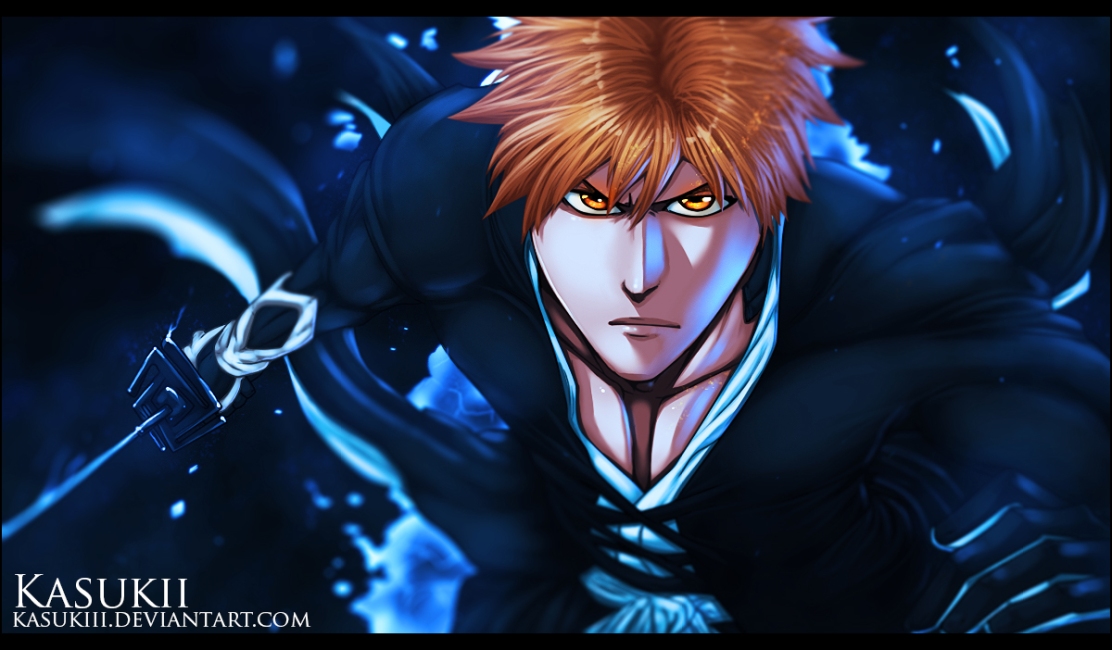 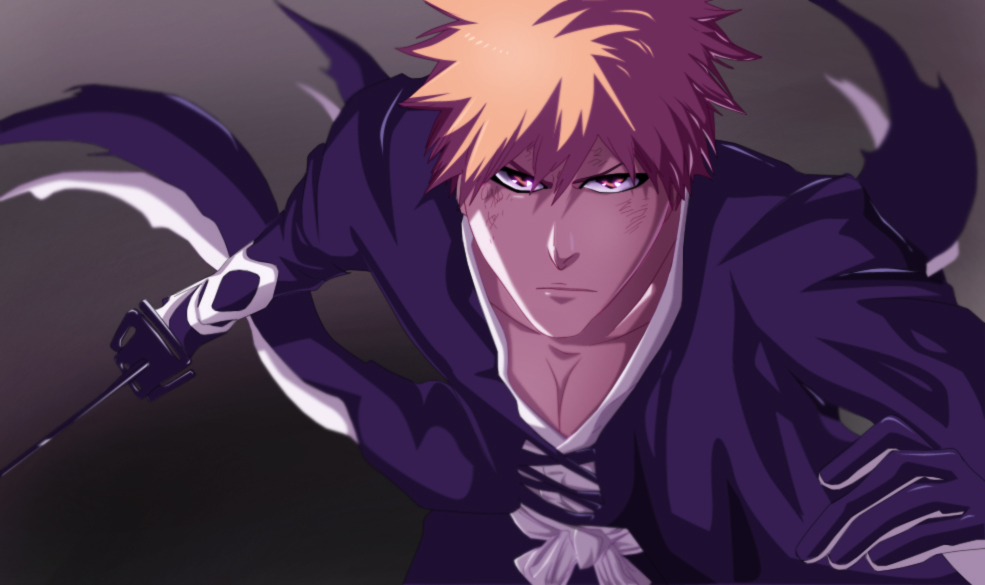 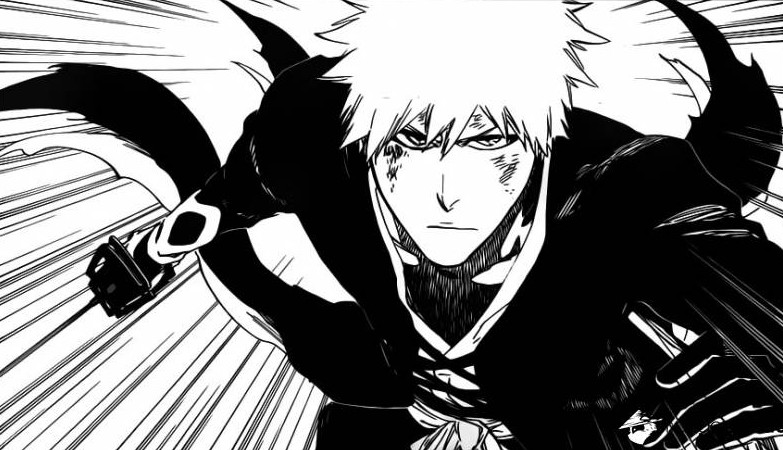 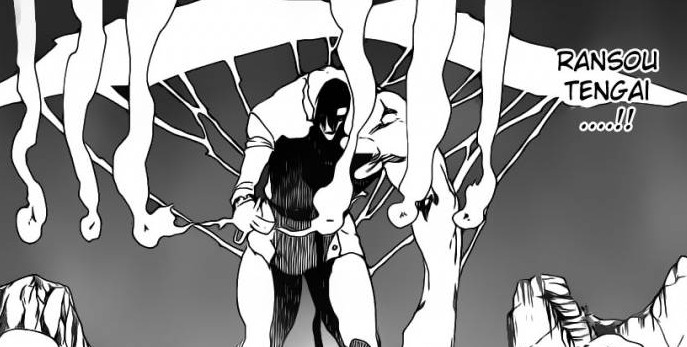 Bleach 499 has an epic start with an epic end. We find out that Ichigo is on his way to Soul Society when Kirge Opie stands up again to block his path. Kirge blocks the end as well as captured Ichigo within a cage, he then blocks the entrance so Ichigo is left in there until he’s saved or destroys the cage. Urahara tells Akon everything he knows about the Quincy’s power as he was observing Ichigo in his fight with Kirge.

Bleach 499 starts of with one of the research members that Ichigo Kurosaki is currently making his way to Soul Society in order to help. Orihime and Chad are currently within Hueco Mundo, they wish they can help but they are told by Urahara to look for a metallic plate as big as a palm somewhere with Kirge. Urahara will explain everything to Orihime and Chad once they’ve analyzed Kirge.

One of the research members is crying in happiness as they find out that everything will be okay as Ichigo will definitely come to save Soul Society from the Quincy’s. Currently, Akon tells Ichigo everything he knows, 2245 Soldiers, 16 Seats and 1 Vice Captain’s Reiatsu has vanished. The numbers of dead are increasing as they speak. A lot of damage has also been done to the buildings.

Ichigo asks if Reiatsu vanishing means that they’ve died. Akon tells Ichigo that both Rukia and Renji are both okay as their Reiatsu still good and showing. Ichigo tells him that it’s not what he’s asking. There are at least 16 individuals who are at captain-rank in power if not superior! They call themselves the Sternritter (Stern Ritter) who wear white Quincy outfits. At this point there are currently no dead Quincy’s, they have not yet won a single battle!

Ichigo asks what they’re abilities are, Akon tells him that they still have no information on this, however Akon does tell Ichigo that they have the ability to steal Bankai’s. This information comes from the Captains of the 2nd, 6th, 7th and 10th Division who’ve had their Bankai’s stolen. Ichigo is shocked at this point as even they couldn’t beat the Stern Ritter, he’s shocked at their amazing powers.

Urahara taps into their phone call to tell them about the enemies abilities, which he analysed from the information he gathered from Ichigo’s battle with Kirge. There are 3 main Quincy abilities. The first is the Quincy Vollstandig, where they change their appearance as well as their power. The second is an ability called Blut. Blut is an ability which uses Reishi to flow in their blood vessels allowing them to increase their attack and defense powers drastically.

Blue is very dangerous but has one flaw. The Blut for attacking and defending works using two different Reishi systems, thus they aren’t able to use them at the same time. The third is the ability to steal Bankai’s which was shown when Kirge tries taking Ichigo’s abilities but failed. Urahara tells Akon that they use a metallic plate to take Bankai’s, he will examine it to see how it works. Urahara tells Akon that they waited for Ichigo to go to Hueco Mundo in order to invade Soul Society. Ichigo is told to be wary of their powers.

A light passes through Ichigo’s side which goes to the Soul Society end of the path, Ichigo notices that many of them go right to the door and block them with the light. Once the door Soul Society end door is closed, Ichigo tells Urahara that the exit was blocked. We can see that both Orihime and Chad have both been seriously injured, Chad has multiple holes within his body dues to the attacks sent by Kirge.

Kirge Opie gets up to enable his Ransou Tengai. He tells Urahara that he won’t let him go to Soul Society even if it costs him his life, he’s going to take his Majesties orders seriously right until the end. He tries to stop Ichigo at all costs. He then sends another attack which is blocked by Ichigo but then splits into forming a cage like object trapping Ichigo.

Ichigo is shocked at what he’s done. Kirge is currently laughing at the fact that he’s finally caught Ichigo. He tells him that he was almost able to get to Soul Society, but he won’t be able to protect of get to Soul Society because of the cage. Kirge tells him that he’s lost as he’s going to be stuck in that dark cage. Kirge then shuts the Hueco Mundo entrance. Kirge is blocked his path! Bleach 499 ends here!

Wow! That was literally an epic chapter! Kirge Opie is going on a full on battle to stop Ichigo at any cost. He’s possibly going to die in the next chapter! I presume that within next week’s Bleach 500, Urahara will finally show some of his fighting skill against Kirge has he’s possibly pissed off right now, also Orihime and Chad may not be watching! Kirge may be getting a brutal beating from Urahara!