Fairy Tail 545 is the final chapter of the Fairy Tail series as we see everything that has happened, or is happening a year after it all. Lucy wins an award for her book, while Fairy Tail are the same as ever. Lucy’s story is just beginning as she’s grateful for meeting Natsu and Happy as well as Fairy Tail. They’ll definitely be friends forever. 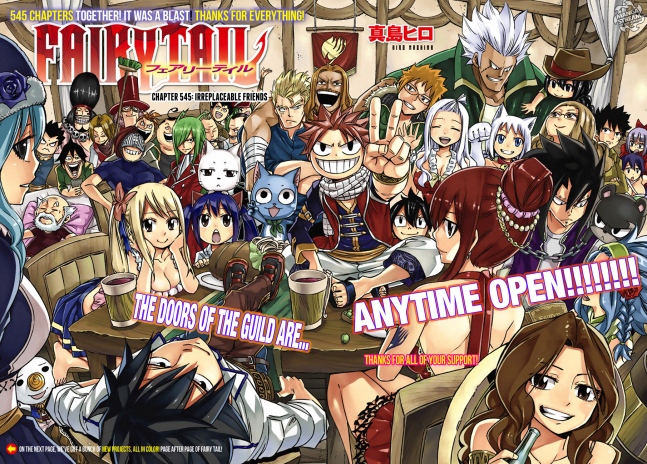 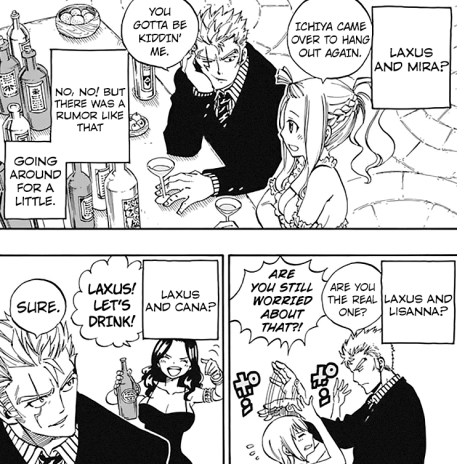 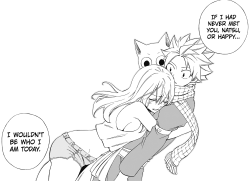 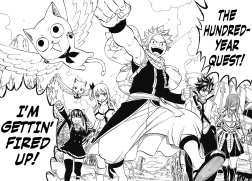 Fairy Tail 545 begins at year 793, we see everyone at an event drinking and eating, we learn that Lucy has won an award for the prize for the best new author. Everyone congratulates her for the book and learn about her ties with Fairy Tail, then we learn that the whole Fairy Tail guild is there too.

They are eating and joking around. Lucy thought that they would all behave, but they aren’t as Gray is naked, Natsu is joking around and doing all sorts. Juvia is even stripping. Lucy narrates as she mentions that one of her dreams has come true. She mentions that Anna, her ancestor is now teaching at a nearby small village.

Gajeel and Levy are together, she tells him something which make him blush, Lucy thinks she hears her saying “baby”, Wendy could hear it. Wendy also goes to Lamia Scale to meet Cheria and others often, she also was able to use a little magic. Lyon and others are doing well. Sabertooth, Blue Pegasus, Mermaid Heel and others also good.

Wendy drinks a little that she begins to strip, she reveals her bra that Gildarts begins to get excited. Gray begins to take her back home, to which he notices her scar, to which Gray tells her that she could get Wendy to help her heal it, he also has his own scar to which Juvia also turns it on him.

Erza appears and tells her that she is very proud of her. Lucy is worried for Erza and Jellal the most. She loves him and Jellal the same for her. We see the King of Fiore retired and Hisui taking over for her, she helps connect Alvarez and Fiore as well as make the country much wealthier. We see Crime Sorciere forgiven as their crimes are wiped clean.

Princess Hisui tells them to live their lives. Thus Jellal and others are freed. Erza reads the book and tells her that it’s complicated, it’s just too technical for her. Lucy mentions that since Jellal was pardoned, Erza has been doing her hair every single day. Makarov appears with a drink in his hands, he cannot use his legs properly.

Out of nowhere, they see Mavis and Zeref at the party, they talk and it’s revealed that they are some  other people, called Mio and Arleos, who look like them. They’re just reminded by them because they’re Fairy Tail. Lucy begins to feel very happy and warm. She is too drunk as she collapses.

Next day, she wakes up to Natsu and Happy, they tell her that she collapsed and told Natsu to bring her back home, she asked them to change her, sleep with her and spend the night. Natsu asks her if she’s ready for work. Lucy remembers all the moments from their past, all the adventures.

She jumps at him and hugs him, then tells him and Happy that if she never met them, she wouldn’t be who she is today. She thanks them so much. Natsu holds her and tells her that he has something to tell her. She is dragged out of nowhere as Natsu tells her that it’s time to work as they’re always gonna be together. Seems like they’re ready as Erza, Gray, Wendy and Carla are ready for their next adventure.  Fairy Tail manga series ends here asking the question if fairies are real.

What a chapter, seems like the series ended just as we predicted. I would have loved to see Juvia also join the team, but then again, it’s okay like this too. Fairy Tail ends with this chapter, I’ll definitely miss it, seems like it’s a good way to get me to start another show too, maybe One Piece? Or something else, we’ll see. Anyways, what are your thoughts? Go ahead and comment down below telling us what you think.

Leave a Reply to Sunite Cancel