Boruto 4 see’s the boys and girls from the class fight it out as they don’t seem to get along that well. Boruto and Sarada try to buy one sandwich, but then can’t seem to figure out who should get it. Thus Shino presents them with a capture the flag challenge which they do to prove who the bests are in their class. Guys or the girls. 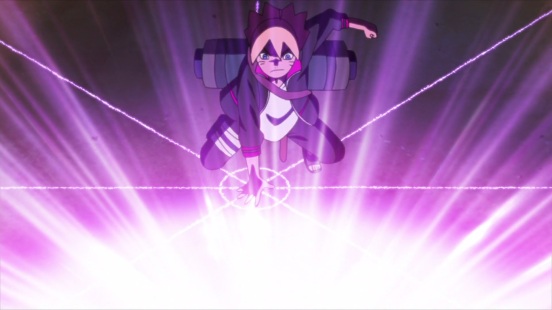 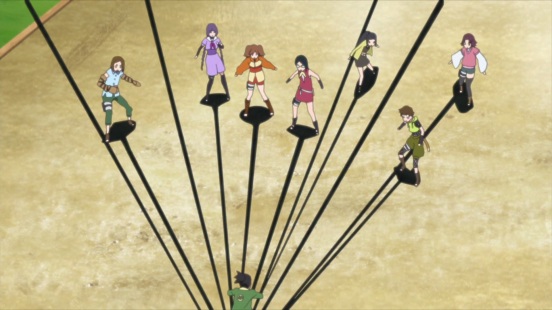 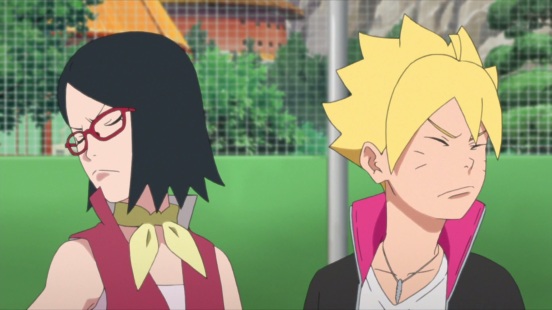 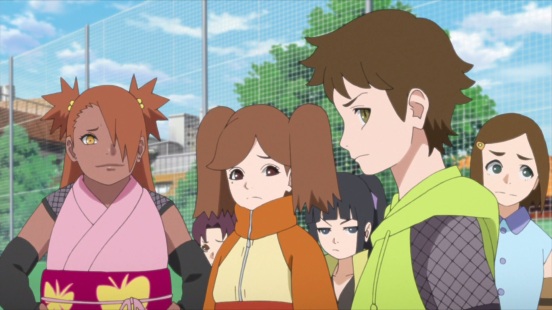 Boruto 4 begins with summonings, Konohamaru starts out with showing what he’s got but then Boruto tries to show what he’s got, but fails. They need to have a contract with an animal to summon them. First off they’ll start with tools. The girls have their own idea, the guys are the opposite. It seems that there is a divide here about whats best.

There’s already rivalry here as both Boruto and Sarada start fighting about whats best, and how the others see them as the worst class full of mischievous children. Shino and Konohamaru later talk about how it used to be with all the marks and such. Boruto and others go get some food, to which Sarada and Boruto have to fight it out for the last sandwich.

Boruto wants it, and so does Sarada. Shino shows up after it gets heated up that he decides to challenge them. The girls and guys are a team, to which the winner gets to tell the losers what they have in mind. The first to the flag at the top of the school. The challenge begins as Iwabe creates a wall, but Chocho smacks the wall down.

Shikadai uses his shadows to stop the girls. Shino also setup some traps, to which it’ll keep things interesting. Metal Lee notices shuriken coming for him, he catches them but then gets nervous and loses it. Denki later open ups a door for them, then hacks the system to trap the girls with a large frog created by Inojin. Boruto sets off the water sprinklers that it gets rid of the frog.

Boruto, Shikadai and Inojin are left as Denki got caught. They try to come up with a plan to use a scroll to summon something. Boruto goes straight up, Inojin and Shikadai are there for distractions, but the girls use explosives. Chocho tries to climb it but Boruto there’s another explosion which causes Chocho to get flung off.

Boruto tries to save her, thus Shikadai and Inojin are also forced to pull him back saving them both. But there seems to be a large snake like created rampaging. But another creature appears in the dark as Boruto notices it but no one else does, it seems only he can see it. Konohamaru appears and uses Rasengan to kill the snake. The girls win, but they forfeit because the guys helped save Chocho’s life. Boruto 4 ends here.

A pretty good episode if you ask me, seems like the first few episodes are progressing quite well seeing that we’ll get more characters introduced in next weeks Boruto 5, titled “The Mysterious Transfer Student”, especially Mitsuki.