Fairy Tail 517 once again goes back to being a shit manga with the release of this terrible chapter. Wendy and Erza manage to SOMEHOW derail and nearly kill one of the STRONGEST mage in existence. Wendy uses Eileen’s body to fight back and remove Eileen from her own body. This chapter overall was just bad. 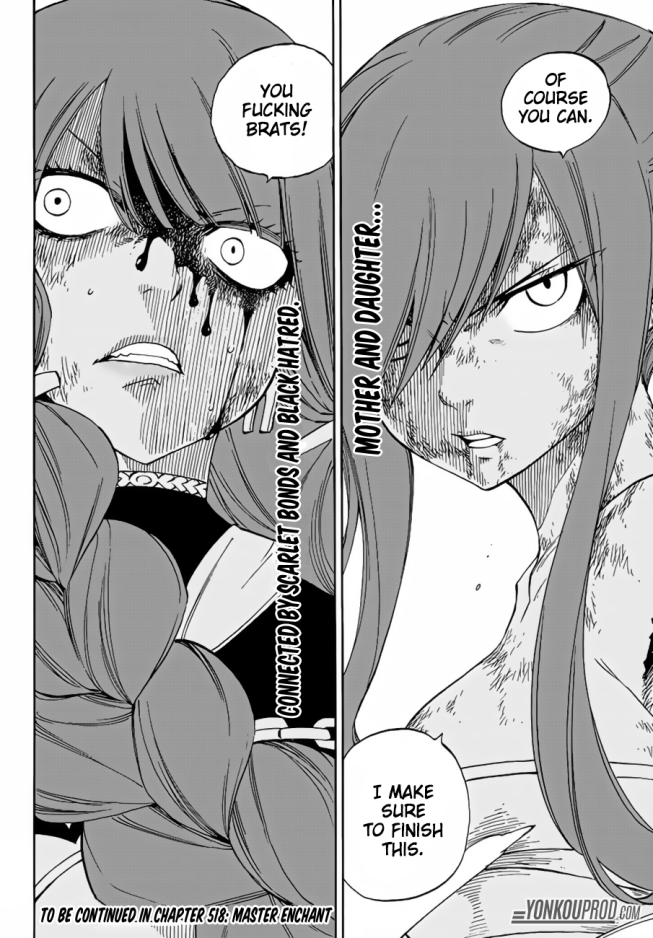 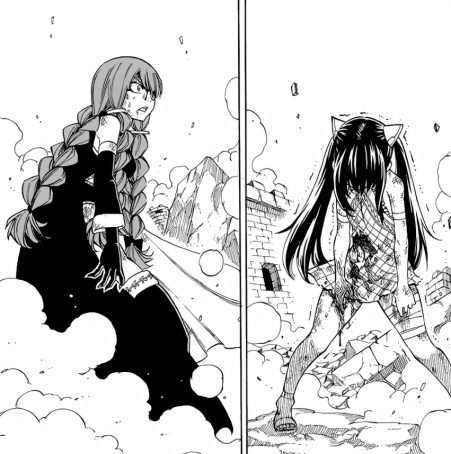 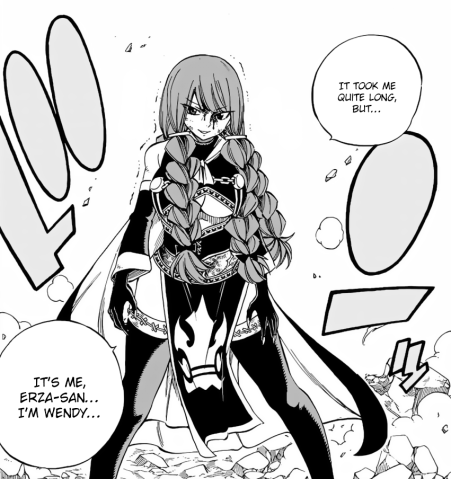 Fairy Tail 517 begins as Eileen has taken over Wendy’s body, she analyses her body seeing that her leg is damaged along with numerous bruises. Although she is still able to move in Wendy’s body. Eileen even teases Wendy’s breasts, which is the first thing to reduce the impact of this stupid chapter. Eileen’s body collapses as Wendy’s conscious disappears.

Erza tries to attack but Eileen just strikes her down. She uses her magic to attack Erza. Seems like her own powers haven’t dropped s much as she anticipated. Eileen mentions that for her in the little body to have a daughter would be something very wrong. Eileen then begins to use the Sky Dragon Slayer magic and attacks Erza.

She now calls herself Wendy Belserion. As Erza tries to climb up and attack Eileen, Erza remembers all the times Erza and Wendy have worked together, from the very first moment to the each time she has protected her. Erza takes the hit as Eileen calls Erza too soft. Eileen then enchants and causes Erza’s armor to explode but it doesn’t do any damage.

Next up, (all predicted) somehow Wendy takes over Eileen body as she had saved Erza from any damage. Eileen finds it impossible that Wendy was able to take over her own body. The second joke of this chapter arrives when Wendy herself calls her boobs to be too big, why would you even need to add this in at such a important moment in the fight.

Wendy begins to power up, calling Eileens power amazing, then throws an attack towards Eileen. Eileen tries to stop it but cannot as Wendy is already enchanting that they both separate from their current bodies and swap once more. They begin to swap when Eileen begins to hurt herself in order to prevent Wendy from switching.

However, Wendy just mentions the fact that she is able to get scars means that she is still alive. In that body, she has shared countless memories with others. They swap as Erza also switches out her armour. Wendy has returned as she mentions that she is leaving the rest to her. Erza gets serious as Eileen is angry that she was capable of doing this. Fairy Tail 517 ends here.

Although Eileen has not been defeated, it seems as though the fight has already finished, it feels like Eileen has already lost. With the hype of last week’s chapter, this chapter goes right in the trash for me. Anyways, what do you guys think? Go ahead and comment down below telling us what you think about it as we wait for next week’s Fairy Tail 518, titled “Master Enchantment”, hope it’s actually good.