You may have already known, but this post shall remind those who haven’t yet realised, but the second season of Blue Exorcist: Kyoto Saga (Impure King Arc) has already released its first episode. This time, we follow after the what had happened in the first arc, which concluded with the fight between Rin and Amaimon. 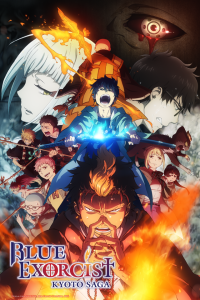 Not only does Rin gain the abilities of a demon, but also a tail and fangs along with the deadly blue flames which can destroy absolutely anything. Rin sets himself to fulfil and become a Exorcist just like his father. In order to kill Satan, he must first learn the secrets he posses as well as control his powers so they don’t overcome him.

The second season begins with full force as Rin and his classmates continue on to Kyoto! You can watch the first episode below:

If you’ve already been watching the anime, and have yet to watch or have already watched the episodes, what are your thoughts? Be sure to comment down below telling me what you think about the episode. Also be sure to share this with others who might enjoy the anime.