Fairy Tail 516 see’s Natsu meeting his inner self, he was able to walk into his inner consciousness to find Igneel there, he meets him to tell him that both Igneel seed grows, but another, known as Demon Seed is also growing within him, this will soon cause Natsu’s death. Wendy and Erza fight Eileen, she realises the similarities in herself and Wendy, thus is capable of taking over Wendy and her body. 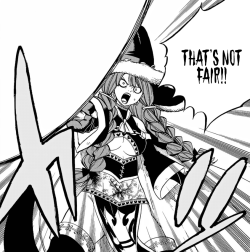 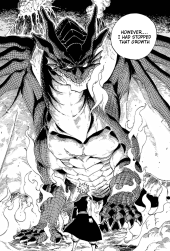 Fairy Tail 516 begins as Erza tells Eileen that even if she is her own mother, she will annihilate anyone who dares block her path to Fairy Tail. Eileen thinks that if she had told her about the past, her feelings would change, but this has not happened. It’s a shame as Eileen quickly attacks, Erza also begins her counter attack.

Erza is told that just by using magic, she will not be able to win, but Erza mentions that as she has a family, she will win. Erza attacks using her Black and Red Twin Blades which manages to hurt her, Wendy also powers up and is asked if she heard about the Dragons’ seed within her. Wendy understands this but mentions that as her mother was inside her, she was able to suppress it.

Eileen learns of this, as it’s the same with the others Dragon Slayers. We move to Natsu as he meets Igneel, he’s finally reached the core of his own self, he meets his Dragon Seed, this being Igneel as he mentions that it grows within him as dragonification continues but this process has been halted. Natsu mentions that it might be because Igneel left, but he is told that this is not the case as there is another seed which proves that Natsu is END.

The Demon and Dragon seeds are trying to fuse together, this is what’s happening within Natsu. This is the reason why Natsu is somehow dying right now. We move back to Eileen as she learns of  the way to stop the dragonification process which was to seal themselves within the body of the Dragon Slayer.

Belserion who gave her the power died on the battlefield, she took his name and promised to avenge him. She gets angry at the fact that she could have prevented the Dragonification process. She attacks back as she mentions that she wants her own body back! Wendy and Erza both get ready as they attack.

Wendy uses her enchantment magic on Erza, but Eileen disables it, however Wendy counterbalances it with her own advanced magic, this shocks Eileen. Erza uses the power given to her to attack Eileen there and then. She strikes Eileen’s head as she begins to bleed from her forehead.

She mentions that she finally understands, the truth about enchantment, she understands why she could not put herself into Erza, as there was differences between them. However, there must be some sort of compatibility, thus she casts a spell onto Wendy as she mentions from Wendy that her abilities have decreased, but it does not matter. She finally has a new body, a new life as has been reborn anew. Fairy Tail 516 ends here.

A pretty damn good chapter, I actually wasn’t expecting to see Wendy being used in such a way within this chapter. I like the fact that Hiro is trying to push that Natsu will die, but I’m highly sure that he won’t, or it’ll take a long time before he comes close to it. Nevertheless, it was a good chapter, can’t wait for next week’s Fairy Tail 517, titled “Wendy Belserion”, should be good to see Wendy go crazy.