Death Note: Light up the NEW World trailer dropped and it’s amazing! Madman Entertainment began streaming an English-subtitled trailer for the live action movie. The sequel will open on the 29th of October in Japan, with Australia and New Zealand opening on the 10th of November. 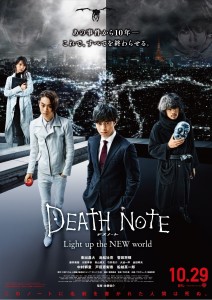 A three-episode prequel mini-series was also released on the 16th of September, which is called “Death Note NEW GENERATION” and available on Hulu.

The trailer above made the movie quite interesting, although I never judge a movie by its trailer, this one showed some great moments which I know I’ll love to watch.

Further to this, it’s a sequel of a movie which I quite liked, from what I can tell, I’ll definitely like to watch this one when the English subbed version is available.

Nevertheless, what are your thoughts on the upcoming movie? Go ahead and comment down below to tell me what you think about this movie, will you go and watch it?