Fairy Tail 506 see’s the result of Makarov’s Fairy Law, all while Mavis is down crying while Laxus tells her that her strategy is needed, while Natsu and Gray fight each other, hitting each other nonstop till Erza shows up and tells them to quickly stop their nonsense, at the same time she cries at the recent death of Makarov. 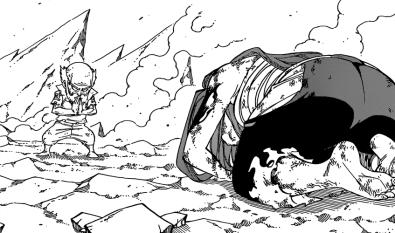 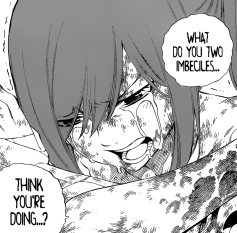 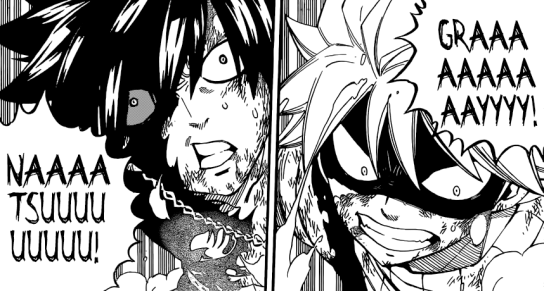 Fairy Tail 506 begins as everyone notices what Makarov has just done, Mavis even remembers the time she has named Makarov. Laxus shows up and tells her that she needs to get up one more time to use her strategy. Erza also gets to the ground as she bows to him, she mentions that she has grown up as his child.

Eileen mentions that about 70-80% of their forces seems to have been wiped, while Zeref mentions that the attack itself was told to them by him, and he is crediting them with what they have just done. However, no casualties have been hit onto the Spriggan 12, the flow of battle shall not change.

Natsu vs Gray continue on fighting, we see that Natsu’s body begins to change as his arms and legs are becoming more demon like. Gray tries to attack but Natsu just goes ahead and fight even harder. At one point, we see Natsu and Gray get so entrenched into this fight that they are ready to kill one another.

They are about to hit and destroy each other but Erza steps in and takes the attack from both of them. Gray and Natsu attack while Erza is hit by both the fire and ice at the same time. She cries at the same time, while mentioning what the two idiots are doing. Both Natsu and Gray notice that it’s Erza and that she is crying. Fairy Tail 506 ends here.

A pretty dope chapter, seems like both of them will stop fighting (for now) and will face the greater opponent, being Zeref and the Spriggan 12. Nevertheless, it seemed like a really small chapter just with a lot of fighting. Still really good, can’t wait for next week’s Fairy Tail 507, titled “Voice”, should be good!