Fairy Tail 506 covers a lot of different things, especially with the fact that the hype is building once again, especially as one of the elders of Fairy Tail uses Fairy Law to help everyone from the guild, if you want to know what happens in the chapter, read on otherwise spoilers follow. 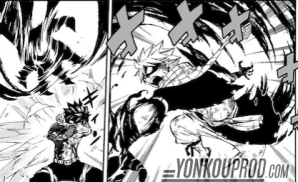 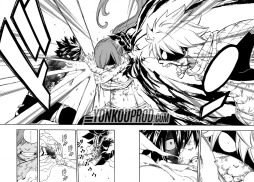 Fairy Tail 506 begins as Mavis first remembers naming Makarov, the moment she met him for the first time. Laxus tells her not to worry, but there are many enemies still left and thus need her strategies. Erza gets on the ground as she mentions that she is glad that she was his child.

Eileen mentions that even if 70-80% of their troops are gone, the 12 are still fine, so it’s not very different compared to when they began fighting. Natsu and Gray continue to fight against each other, at the same time Natsu begins to slowly transform into a demon, most likely END is taking over.

Both Natsu and Gray attack with very strong punches, but Erza interrupts them as she takes both Natsu and Gray’s attack only using her hand. She gets burned and frozen at the same time. She asks both what exactly, they’re doing fighting. While Natsu and Gray both notice her, she is crying as she bears the weight of Makarov’s death.

This chapter seems like its bringing back both Natsu and Gray to the same page, stopping their fights and focusing on the real enemy. Nevertheless, Fairy Tail 507, will be titled “Voice”, anyways can’t wait to see what more these chapters have to offer. hopefully Makarov stays dead and somehow doesn’t come back.