Fairy Tail 487 see’s the fight between Gajeel and Bradman come to a shocking ending as Levy is poisoned and Bradman wants to end Gajeel’s life by taking to his death too. Beforehand, Gajeel used his Dragon Force to defeat him which set out the end of Bradman. Brandish and August also talk when August mentions that she’s betrayed their emperor and kingdom. 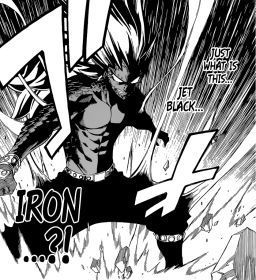 Fairy Tail 487 begins with August meeting with Brandish and others, she has come to negotiate with him. He asks if Jacob has been killed, but she mentions that he has been defeated and captured. God Serena is currently with August as he’s somehow stored him in one of his hands. Lucy and others notice how strong Brandish is, but also notice that August is on a whole new level.

August mentions that he doesn’t seem to see that Brandish has been armed or tortured, she mentions that she is a loyal citizen of the Alvarez Kingdom, this is when  August mentions that these are the exact words of a traitor. They all dedicated their minds, bodies and souls to Zeref, if she cannot comprehend this, then she is nothing more then an enemy.

North of Fiore we see Gajeel and others fight the enemies, we see both Gajeel and Levy trying to fight against Bradman. Bradman mentions that the first seal is stealing magic by using the magic barrier particles, the second is to open the door of the underworld, and the third is for the reaper to bring down hell’s judgement upon them.

Bradman completely changes his form as his body seems to have changed into magic particles, he mentions that there is no hope of return after this point. Gajeel knows that these are nothing but empty threats, the other 12 are much stronger, Bradman mentions that he cannot manipulate magic, but curses, just like the members of Tartarus.

Bradman uses his Exploding Helix then launches his Tenga Goken, this tears apart everything in sight, then releases Onimaru, then after uses his Tenchi Kaimei which engulfs everything. Seems like it’s a very similar attack compared to last time where water covers everything, they are underwater.

Levy uses her magic to create a hole letting all the water out. Next up, both of them release their roars, but Bradman uses his own tricks to get ahold of them then releases the third seal. It attacks and raises a large number of skulls from the ground which hurts both Gajeel and Levy. Seems like her mask was of no use as the magic particles enter through the skin too.

She mentions that she wanted to save him, to which Gajeel gets pissed off and begins swinging at Bradman, which forces him to use his Dragon Force, he turns into a dark man made of iron coloured jet black which he uses to his advantage as he smacks and defeats Bradman. As Bradman dies, he tries his best to take Gajeel with him to hell. Fairy Tail 487 ends here.

A pretty good chapter, seemed like the fight between Bradman and Gajeel was nothing but good, another fight, another win. Nevertheless, seems like next week’s Fairy Tail 488, titled “The Two of Us Together, Forever and Always” will see something different, maybe with Levy and Gajeel or the fact that Bradman is taking Gajeel away.