Fairy Tail 483 see’s the defeat of all the Historia as we see Jellal use his Grand Chariot in order to defeat Neinhart. Along these lines, we see everyone back at the guild as they try to work a plan out. We hear from Brandish about August being the strongest man, but Eileen Belserion is known to be the strongest woman. 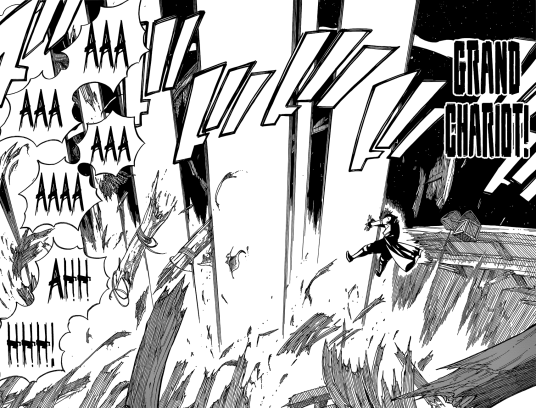 Fairy Tail 483 begins as we see Jellal tell Erza to hang in there, he shall commit a sin just once more. The sky is rid of all clouds when we see the sky and stars, everyone on the battlefield also notices this. Juvia and Meredy use maguilty=sense as it allows for their power to be amplified. Lyon and Gray also fight Ur as they’re unable to defeat her.

However, not it’s his time to move forward. Ur mentions that them taking her down, not in a million years. Wendy is also in trouble, both Carla and Sherria try to help. Carla cries out mentioning that she will be her wings, and her legs as she always wants to be together forever. She takes her out.

Laxus fights against Precht, Juvia and Meredy working together, same for Lyon and Gray. They all unleash they powers against them. Ice Devil’s Zeroth Long Sword, Cygnus’ Bladed Icewings from Lyon and Gray against Ur. Sky Dragon’s Crushing Fang by Wendy. Maguilty=water by Sherria and Juvia, and Laxus’s Lightning Dragon’s Jaw on Precht.

Jellal wants to use his ability but Simon is brought out. It kind of stops Jellal but Kagura attacks Simon as she mentions that it’s not Simon who she just attacked. Jellal quickly attacks using Grand Chariot where it completely destroys them and the Historia he made. Erza looks at the sky mentioning that it’s beautiful in the colour scarlet.

It’s true that August is the strongest man out of everyone, however there is someone else who is known to be the strongest woman. She is Eileen Belserion, the one who carries the moniker “The Scarlet Despair.” Fairy Tail 483 ends here.

A pretty awesome chapter if I say so myself. seems like we’ll be exploring Erza’s past, and/or future, as it seems that the strongest woman could be Erza’s mother. And from what I can tell, she looks really scary. Has similar aspects from Erza too. Nevertheless, can’t wait for next week’s Fairy Tail 484, titled “The Monstrous Six”, can’t wait!