Fairy Tail 277 see’s Natsu, Lucy and Happy altogether once again as Lucy’s wishes come true when Natsu mentions that he shall aid in the rebirth and reformation of Fairy Tail. With everyone dispersed as they are, Lucy’s information will help them. And Natsu leaving a large message in Magnolia will give everyone the message. 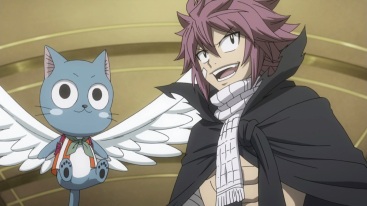 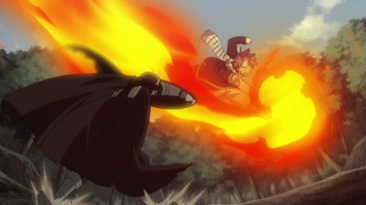 Fairy Tail 277 begins with Natsu at the kings place as he’s forced out of the palace for destroying their stadium. He meets up with Lucy as they go to get some food. At the same time, we learn that they have been on a journey. The first is that Natsu ate mushrooms and got crazy and destroyed a few people.

They go elsewhere after Lucy pays for the food. Jason finds a cool story to post up to his magazine. At the park, we see that Lucy has been acting strange in front fo them. She mentions that Fairy Tail disband, and that everyone went their own way after Natsu had left. She also is a little angry at him for running away.

Makarov is also missing, the others are also doing their own thing. She has a lot on her mind, that is why she can’t get angry at him. They get to her house, they quickly begin messing it up, by eating junk and not eating properly. Natsu also gets a hair cut to get in shape to look like before.

We also see that they had some journey, one of which was with Gildarts. They met in a forest, they started to fight when a creature ate Natsu. Gildarts got mad and he destroyed everything. Later, Natsu and Gildart’s bags got switched. Natsu had food while Gildarts had adult books.

Late that night, we see Natsu and Happy trying to draw on Lucy’s face, but they notice the great detailed board which Lucy has created during her time. It seems like she has done a great deal of work. Later the next day, we see Natsu put up the Fairy Tail flames on the castle as a sign to get them back together. Natsu mentions that he will get the guild back together. Fairy Tail 277 ends with them going on a mission.