Bleach 652 shows the true relationship between Shunsui and Nanao, after her mother gave him the Hakkyouken sword, she was executed. Nanao recruited into Squad 8 when she finally realized that he’s the man who talked to her mother, the man with the hair pin and pink kimono. Nanao is able to use the Shinken Hakkyouken to cut Lille when Shunsui aids her in this battle. 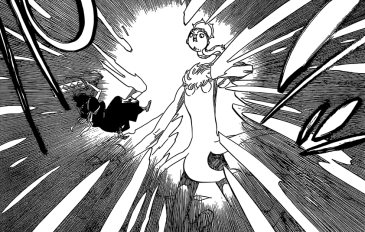 Bleach 652 begins as Nanao faces forward with her Shinken Hakkyouken, Lille asks what sword she has. All Lille can see is a tacky, shiny sword as he’s unable to see the true form. It shines so brightly that one cannot even see the blade. Nanao is glad as the sword reflects the ability of the God it’s facing off against.

If it’s reflecting the light from his eyes, it means that it’s diffusing the light that he’s emanating. Lille doesn’t understand but he’s happy that she refers him to as a God. Nanao steps forward as tries her best to strike him. We go to the past where Nanao’s mother talks to a man, she mentions that the sword she holds is something that will only respond to the Ise House.

No misfortune will fall on him, there is only this man who she can trust except for those in the Ise House. She tries to give him the sword as Nanao listens quietly from inside the house. The first thing she notices was the hairpins on this man. People talk about this man who is a captain and visits the head master often.

Nanao notices that she watches him from afar, he always wore a cloak with a woman’s kimono, it was a common pattern that you could find anywhere. The only sentiment was that she knew her mother had a similar one. She also notices that hairpins, they were just like her mothers.

Nanao once day notices that she has been proposed to join the 8th Division of the Gotei 13. At the time, she was living with people who were friends of the Ise family, after her mother had died. They treated Nanao like their own daughter. Still, Nanao was unable to make the Asauchi that was provided, she did not have a zanpakuto, thus she had thought she could get into the Kido Corps.

We return to the present as Nanao strikes and cuts Lille’s arm. Lille however parried the attack and quickly learned that this sword could be a problem later on. Thus he charges up an attack where he plans on attack Nanao with. It gets brighter and brighter as Nanao notices that it’s going to be a big attack.

Lille mentions that he shall not let his guard down as a God. Shunsui remembers that he had always blamed himself, he learned about the execution a day late when the Central 46 put out an order to execute Nanao’s mother due to the loss of the Shinken Hakkyouken. We move onto when Shunsui’s brother gave him the hairpins.

Shunsui realises that those who give him precious things eventually die, it’s a heavy burden and one most difficult to bear. He thus asks Nanao to forgive him for taking charge of her own sword, and that she shall take the weight off his shoulders. He mentions that he shall protect her. Shunsui appears from her shadow and tells her that it’s time to go. Bleach 652 ends here.

A magnificent chapter, so much awesomeness was incorporated into this crazy chapter. Like other chapter which seem short, this one was definitely not. Nanao and Shunsui will definitely kill Lille, I think. And the past about Shunsui’s hairpins and cloak have been revealed. Can’t wait for next week’s Bleach 653 when the battle intensifies further.