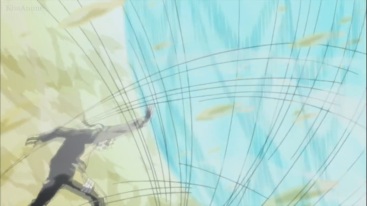 Naruto Shippuden 327 begins a double episode day as we follow Kurama’s journey within Naruto from the moment he was a child, we follow him during all the moment in which he wanted to bring himself out and weaken the seal, by doing this we see Kurama get Naruto to go out of control every time he fell for hatred.

Naruto Shippuden 327 begins with Son Goku telling Naruto that even if he helps him out, he shouldn’t expect for them to be friends or allies. Kurama listen to this and he expected this. He remembers the moments he faced with Madara, Hashirama, Mito, Kushina. They telling him not to bother and do anything bad. We go to Naruto’s birth when Kurama tried to attack him.

We start from when he is within Naruto, he wakes up mentioning that slowly he’ll start by using Naruto as he pleases, from then on he’ll begin by give Naruto his chakra to which Naruto’s seal will begin to weaken and he’ll be able to have more control. Kurama understands that he’ll have to be patient. Naruto is getting bullied, Kurama notices that at his age, he still hasn’t used any of his chakra.

Slowly by slowly, Naruto was able to use Kurama’s powers in order to do many things. Even fight against Gaara, from which he transformed into Kurama’s fox. This showing that he knew that he was inside him. Even his fight against Sasuke, he noticed this. Naruto goes towards Gaara to save him, he realizes that the Akatsuki have done this. He transforms into a three tails and goes berserk. He keeps on using more and more of his power.

During his fight against Orochimaru, he transforms into a Four Tails which he loses all control, from then on he asks for more power. And during his fight against Sasuke too, Kurama keeps on coming out at him. During the Pain fight, he was able to get into his Seventh Tail, which made Naruto go crazy, from then on, Naruto nearly broke the seal however Minato helped him.

Naruto see’s the seal and signs it, allowing for Kurama to come out, he purposely does this, he opens the seal and fight Kurama, this time was to help himself beat all the enemies around him, he goes head to head with him, losing and winning at each point. Naruto tries taking his chakra but fails, however Kushina’s chakra helps him and is able to take a lot of his chakra.

Kurama asks himself how he is beaten so easily by such a person, he goes to describe Naruto but isn’t able to do anything as he’s too powerful, plus Kurama notices that he’s like no other person he’s known before as he’s able to take such great power from Kurama with such ease. Naruto Shippuden 327 ends here.

A great episode and awesome to see all the amazing moments in which Kurama took Naruto for a ride. It was also epic to see his point of view in these moments. The next episode will be posted soon after this, either way, I can’t wait for next week’s Naruto Shippuden 329, when we see even more awesome stuff! Can’t wait!