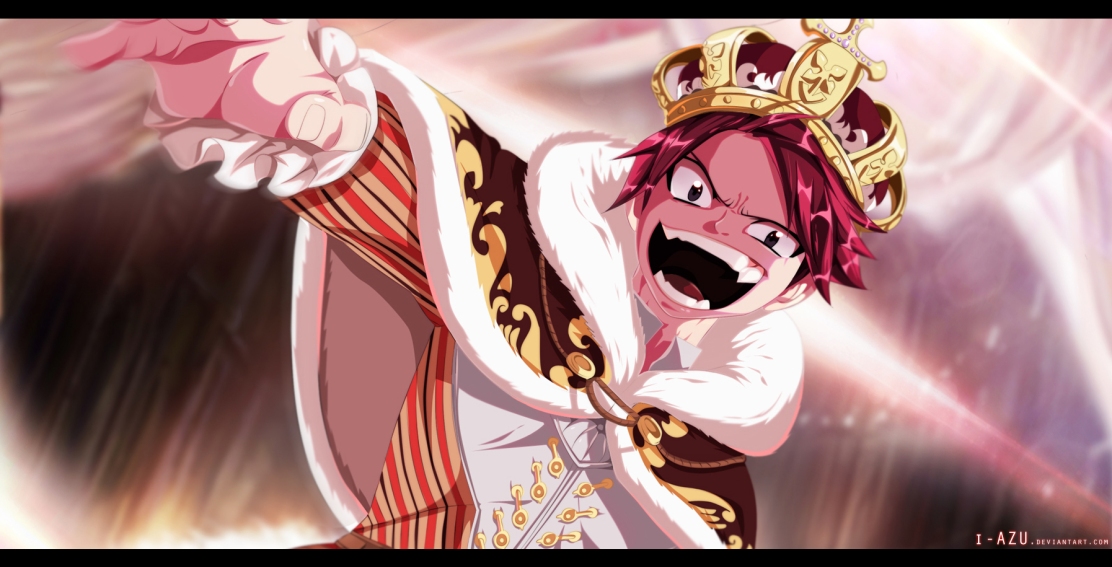 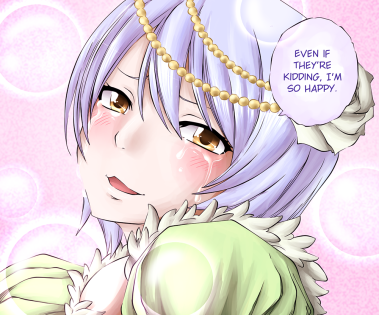 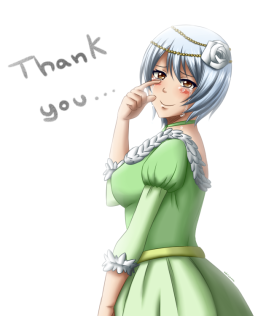 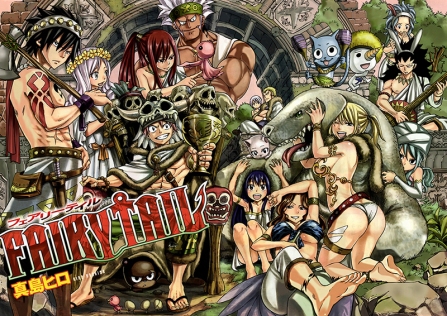 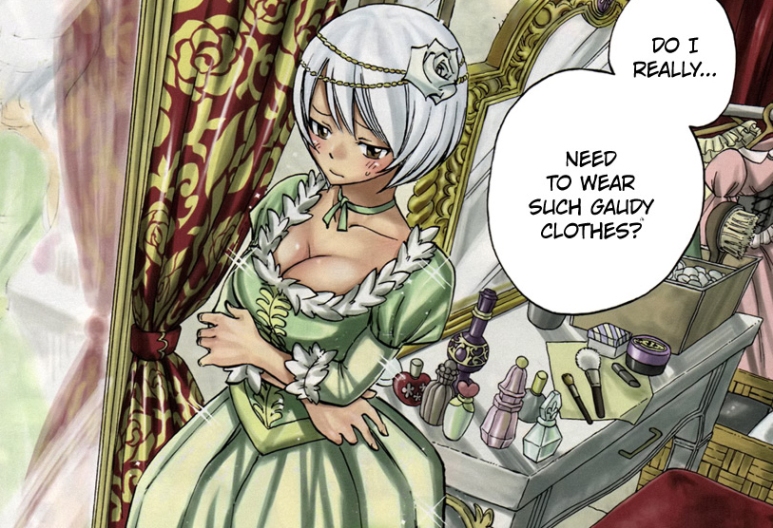 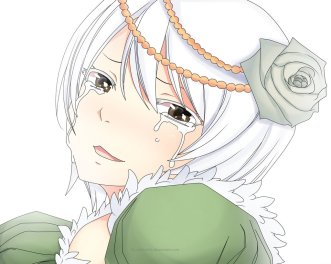 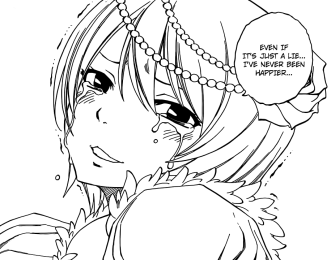 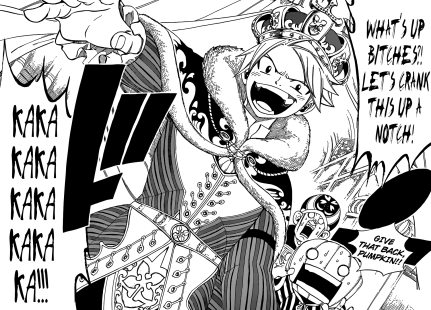 Fairy Tail 338 skips to a few days  later when the King asks all the mages that participated in the war against the Dragons to enjoy their time in the castle, he’s held a party in which most mages are drunk, are fighting over Yukino and which Guild she should be in as well as Natsu not showing up, and when he does, he’s wearing the King’s crown and cloths.

Fairy Tail 338 begins with a coloured page of Yukino, she asks if she really has to wear the cloths in which she’s currently wearing. Lucy, Mirajane and other Fairy Girls are half-naked telling her that she looks beautiful. We return to the village in which many of the people are talking about the emergency evacuation which happened recently. They talk about how it could have been the dragons which are claimed, they mention that it could have just been magic, they also mention that the mages received a party in the castle.

We go to the castle where everyone is excited, they all find their meetup awesome, as well as the free alcohol and free food being served to them. Furthermore, it’s all the guild that are meeting up, which seems to be a good thing. Everyone quickly begins to have their party, from music to drinking. Kagura walks in mentioning that it doesn’t suit her image, however the cloths she’s wearing looks good on her. Makarov and other masters mentions that he never thought he’d be invited into the castle.

Out of nowhere, Juvia mentions that she loves it when he toys around with her affection, he mentions that this new Juvia is even more crazy. Lyon walks in mentioning not to say such a thing, he also realises that Juvia’s heart doesn’t have room for him in it. Gray asks where Natsu is. Chelia and Wendy are looking at jelly, they eat some and Mavis shows up, only Fairies can see her.

Wendy is freaked out and Chelia wonders what happened, she wants some and Wendy tells her to be careful because she’s a spirit. Wendy asks if she’s seen Natsu, she mentions no. She mentions that he usually sticks out of the crowed, Chelia feels something strange while Mavis goes for her food.

Everyone begins to notice that Natsu isn’t here, Laxus also notices while he’s been surrounded by girls. Erza walks up to Kagura asking how her wounds are, Kagura mentions that she could ask her the same thing. Erza mentions that a lot of has happened, however it would mean a great deal to her if they could be friends. Kagura denies it, then mentions that she would prefer it if she could become her big sister. Erza looks surprised and gives Kagura a hug mentioning that she’s adorable.

Erza also notices Millianna, who seems to be depressed, Erza pulls out Super Happy from the middle of her chest, Millianna notices but looses interest, then Lily is pulled out, then Carla who are all hugged as though they’re stuffed animals. Erza asks Happy where Natsu is. She wonders what could have happened, since he would have already been there. Sting walks in with a drink mentioning that he wants to have a drink with Natsu, Gajeel tells him that he’s not there.

He’s plan fails, Gajeel asks about the guy who came from the future, he mentions that he doesn’t any anything, however he won’t be turning into him. Frosch is also happy that he’s not going to turn. Instead Sting gets Gajeel to drink with him. Yukino notices Sting and Rogue, she tries to walk away however they stop her and mention that their Master and Minerva have gone into hiding.

They need to start over and thus they’re asking her back to the guild. Kagura walks in mentioning that her life belongs to the Mermaid Heel, she’s a little drunk. Fairy Tail, Blue Pegasus, Lamia Scale and Quatro Cerberus all want her too. All the Masters also begin to get a little angry and the fight finally begins, Yukino is seen crying, it’s seen that she’s crying because she’s happy.

Arcadios walks in telling everyone to stop it and that the King is going to come in, a shadow appears and it’s not even the King who appears, it’s Natsu! Both the Pumpkin and Datong try to stop him. Everyone is shocked that he would do such a thing. Arcadios asks the Wolf Knights to stop him, but realise that it’s impossible, Makarov quickly knows that he’s going to get in trouble. Everyone knows that he’s crossed the line. Fairy Tail 338 ends here.

A good chapter, pretty funny and it did include a lot of dialogue which I may have not fully covered. Furthermore, it didn’t include a lot of fan service, so it’s most likely that one of the next chapters, either Fairy Tail 339 or 340 might be mostly dedicated to this chapter, since Hiro Mashima likes to do chapters like these. Can’t wait for the next Fairy Tail 339 Chapter!