Which couples do you think are most likely to end up together within Naruto, Bleach and Fairy Tail? There are endless possibilities, therefore here are my thoughts on who I think will end up together as a couple. If you think differently, please comment and tell me which other couples should end up together.

Naruto and Hinata, possibly the most obvious couple within Naruto. From the very start, a shy girl likes an outstanding boy who doesn’t even know she’s alive. We start with both of these because it’s possibly the fan favourite and I’m sure that you’ll agree that they’re a good couple. Even in the latest manga’s Neji gives him his blessing that he should be Hinata since she’s always thinking about him. Hinata, in class, outside class and everywhere else has always been looking for Naruto, and when he’s around her voice changes into something that explains that she lives him. So what do you think? They should obviously be together right? [Image: unhai]

Sasuke and Sakura, yes, it’s has to be mentioned, even though it’s one of those relationships where it’s never going to happen, there is still a chance which I personally think will happen right at the end. That is after they’re either killed or something bad happens, nevertheless, I think it might happen. [Image: DenebFlare]

Sai and Ino, I know what you’re thinking! What!! Since Shikamaru has already been snatched up, there are a few left such as Choji, Shiba and Kiba. However, Sai to Ino seems something which is most likely to happen, over the anime and manga, she’s obviously had somewhat bad interactions with the others, except when Sai showed up. She quickly asked who the new guy is in a more of a flirtatious way. Sai not having a lot of feelings didn’t pick up on it and thus didn’t make a move. Therefore I believe that as Sai learns more about feelings he will also learn to love Ino, therefore I believe that they are most likely to end up together. Yes, that makes no sense, but it’s just how I feel. [Image: Glay]

Ichigo and Orihime, another easily guessable couple from Bleach. Personally, I feel that Ichigo and Orihime will always be more of a likeliness over Ichigo and Rukia. Orihime has even confessed over Ichigo while he’s sleeping during the Arrancar Arc. She said her goodbyes, at the same time she confesses her strong and deep love for Ichigo. Furthermore, Ichigo’s always been there for her, when times are bad he’s always been there to save her with all his strength. [Image: girlUnknown]

Renji and Rukia, since Rukia and Ichigo can’t happen, the next best thing is for her to get with Renji. They’ve been friends from the very start, when she was still a child. She was also taken up by the Ulquiorra family which helped her. Renji and her are perfect. They know everything about each other and know their best thing and faults. So what do you think about them? [Image: Washu-M]

Urahara and Yoruichi, they’ve spent so much time in the Human World that something would have had to happen. Especially since they’ve been alone for such a long time. They are one of those couples where you’d expect them to be together but there is no sign of them doing anything. Both are effectively spy life so you’d expect them to be able to hide that they’re together. [Image: CarnivorousCaribou] 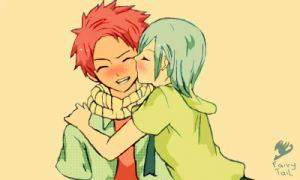 Natsu and Lisanna, I guess you weren’t expecting this were you? I prefer Natsu not being with Lucy at the end. I like the story which was built when Natsu and Lisanna were together when they were young, thus I’d like them to be together. I’m okay with Natsu messing about with Lucy as he wishes and I know that Lucy may have some feelings for him but, no! [Image: Odysseix] 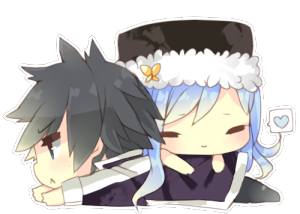 Gray and Juvia, are possibly the best couple within Fairy Tail. They met in a battlefield when Juvia instantly fell in love with Gray. After joining Fairy Tail, she chased him down. I’m certain that Juvia and Gray are most likely to happen, ever since they have similar powers, as well as fighting together against others such as Lyon, who also liked Juvia. Juvia loves Gray, does Gray love her back? [Image: MissLimeTiger] 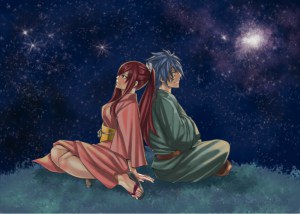 Jellal and Erza, a couple which seems to be forbidden by both people involved. One belonging to the light while the other was born in the dark. Erza from her young age started having feelings for Jellal, he also had a few until he completely changed into something both did not saw coming. He became a dictator and made everyone work, even Erza. It was as though all his feelings were wiped. They cannot be together now, but what about the future? [Image: Quantia13]