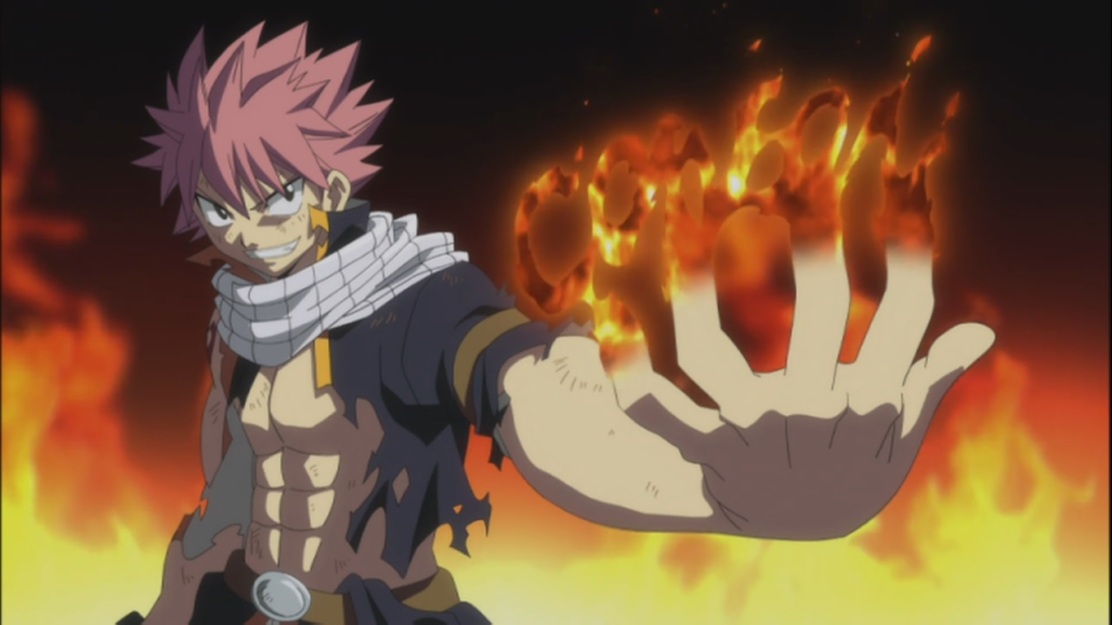 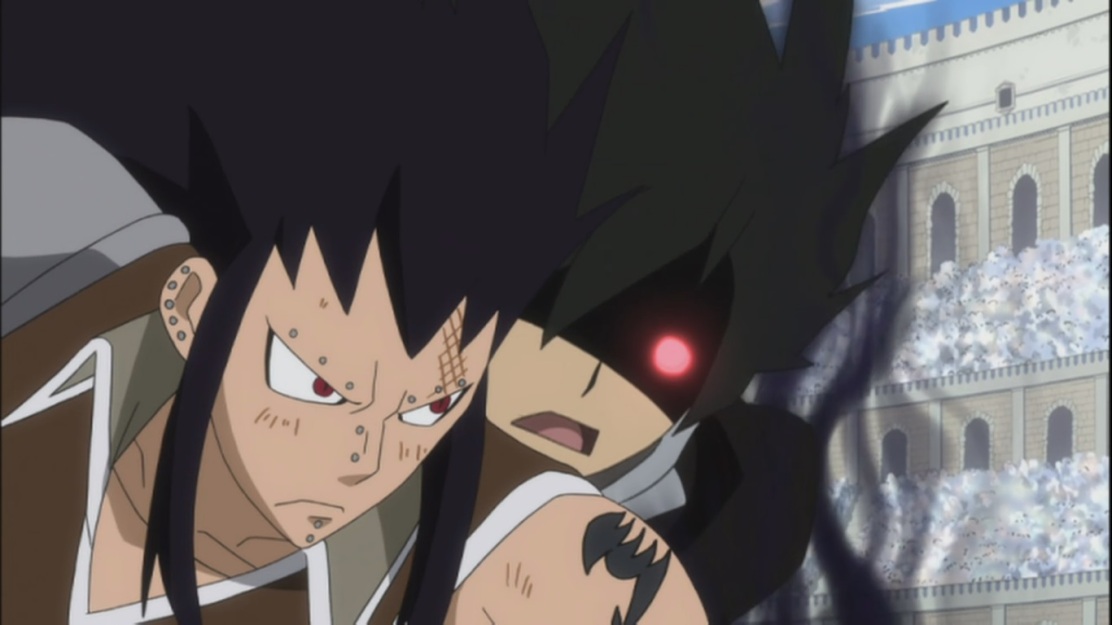 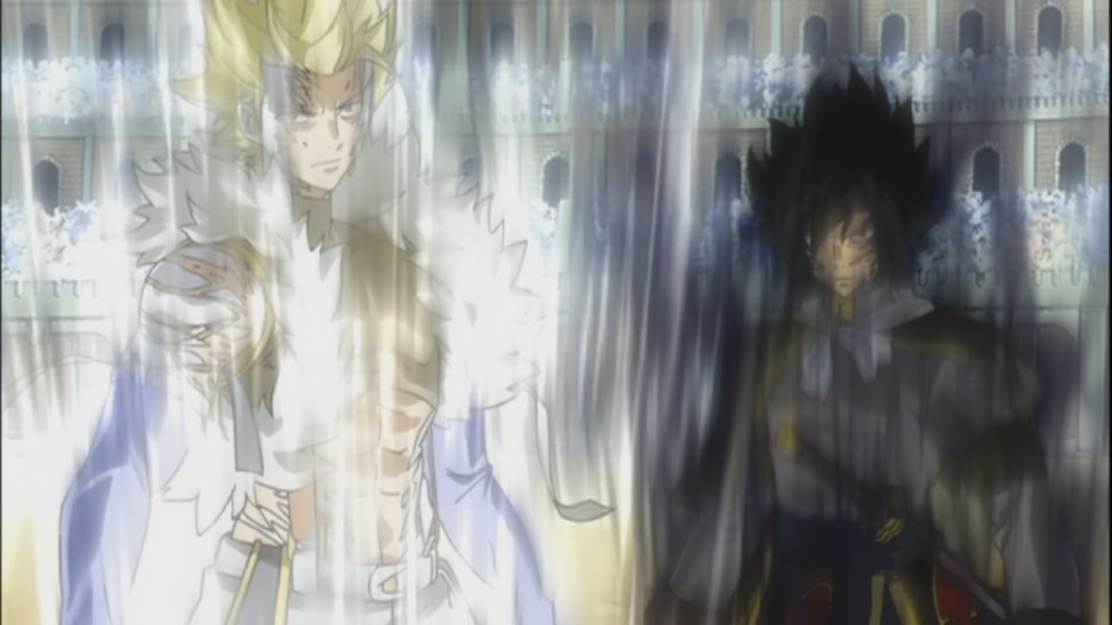 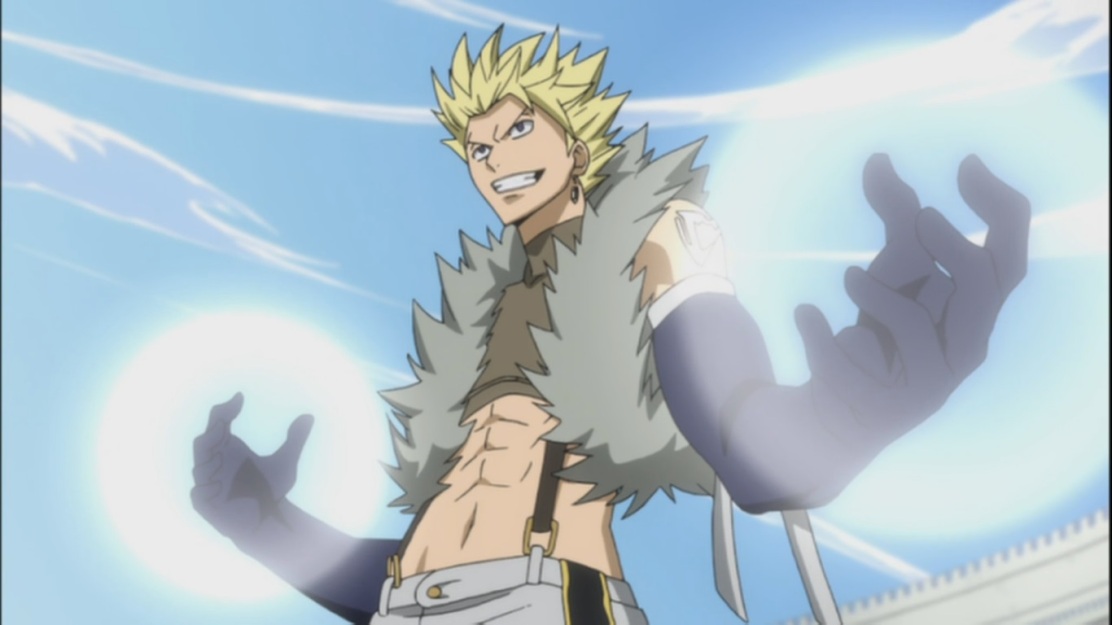 Fairy Tail 174 begins with both Sting and Rogue revealing their Shadow and White Drive. Everyone seems to know who they’re fighting, Gajeel and Rogue with Sting and Natsu. Sting goes for the first hit, Natsu blocks but then can’t seem to do anything. Gajeel is also unable to block after they’ve upgraded their powers.

Both Sting and Rogue are able to work in sync while Natsu and Gajeel can’t do this. Both Gajeel and Natsu keep on getting beaten up more and more. It seems like Sabertooth may have the upper hand at this point. Lucy and the others listen to the crowd and their reaction to get and idea of what’s currently happening.

Natsu keeps on getting pushed around, he’s hit with an attack which locks his movement, he’s unable to move from this position, Sting explains that he can’t do much. He then goes for his attack but unfortunately does hit as Natsu quickly gets the upper hand by burning the spell, and out of nowhere punches Sting’s face as he gets closer. Gajeel does the same by pushing Gajeel around from when he held Rogue’s hand. Both are pushed towards the wall.

They keep on getting pushed back and back, Sting then goes onto increase his strength, he increases his pressure, a white bright light appears which covers the whole stadium. He goes for his Holy Nova which unfortunately is quickly stopped by Natsu’s hand, Sting thinks that he’s got his final blow but it seems like he hasn’t, no one has ever been able to stop that attack before, Sting is shocked!

Gajeel also does the same by stopping Rogue in his tracks. Natsu and Gajeel are now playing hard and keep bashing both Sting and Rogue, blow by blow until they’re on the ground. They start to get up, this time Sting remembers his promise to Lector where he wants to show that he’s much more powerful than Natsu. He goes onto power up, Rogue does the same, he seems to be opening his Dragon Force!

They both keep on opening until it’s fully done. Sting tells Rogue to step out, he can handle this on his own. He goes against Sting and Gajeel at the same time, they attack and Sting seems to be coping with their attack. It seems like he can push them back also. He does this and then goes for his move to which it destroys the stadium by making a whole in the ground.

They fall down, they keep on fighting as they fall, Sting goes after them, he keeps on getting his hits on them. He even goes as far to use his Holy Ray which gets both Gajeel and Gajeel. They fall, Natsu keeps on getting beaten, Gajeel has the same problem. Sting seems to be able to kick them both back. He tells himself that he’s doing this to prove that what Lector is saying is true, that Sting is really powerful! We see a moment when he’s smaller.

Rogue appears, they both deactivate their Dragon Force as both Natsu and Gajeel seem to be down on the ground. everyone keeps on shouting at them to get stronger and stand up and knock them back. Everyone nearly cries at this point. Out of nowhere, Natsu stands up saying that they shouldn’t get too hasty. He goes on to explain that after that he now knows his moves and habits.

He and Gajeel have a small squabble and it seems like after some small fighting with Gajeel, he gets angry and he sends Gajeel away using one of their rails behind him. He’s gone, it seems like Natsu’s going to fight both Sting and Rogue on his own! He gets fired up, writing “Come On” using his fire on his hands. He tells them to come at him. Fairy Tail 174 ends here.

What an incredible episode, the actions seems to just be beginning, and this fight hasn’t even finished yet. It’s going to be an interesting episode for next week’s Fairy Tail 175, titled “Natsu vs Twin Dragon”, possibly the last, as Natsu may go on to fight both of them with all his power, he may even enable his Dragon Force!