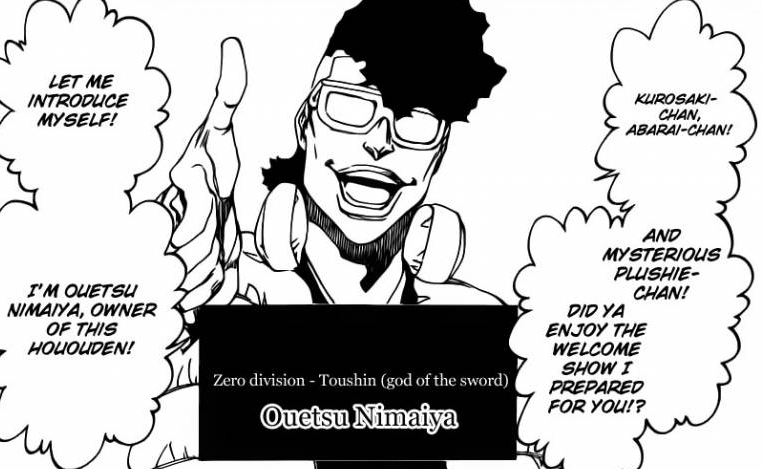 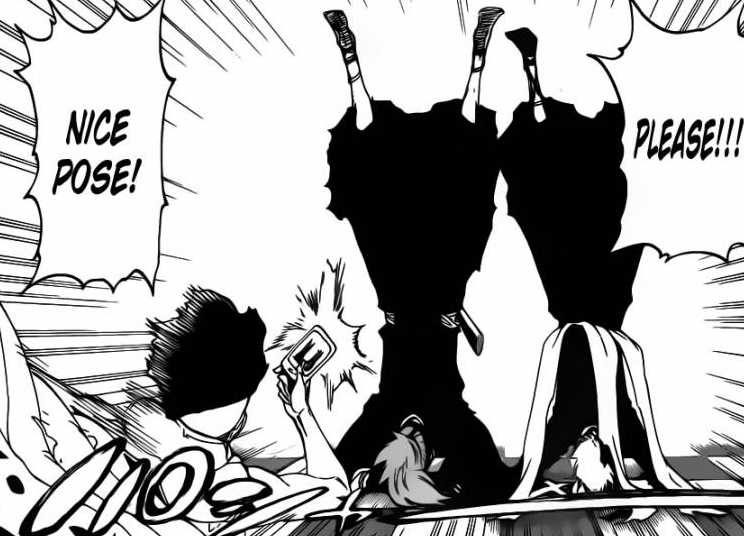 Bleach 522 shows how dangerous some members of the Zero Division can be. After Ichigo and Renji arrive at the Phoenix Palace, we notice how they’re introduced as they first meet a horde of beautiful girls, but then stripped as they’re sent to the actual Phoenix Palace, they’re pushed to fight the rage of their own Zanpakutou’s!

Bleach 522 begins as Nimaiya Ouetsu is first called upon mentioning that Ichigo and Renji have both arrived at the palace, this gives him the cue to go and greet himself to them. We notice that both Ichigo and Renji have once again used Kon as a cushion to allow themselves to drop safely onto the ground. No one seems to be there at the point, Kon keeps on complaining that he’s always been dragged around.

A bright light appears, especially focusing its lights on Ichigo and Renji, making it impossible for them to see who’s doing it. The man also shouts saying that they’re got two guests, he mentions that their home is also Ichigo and Renji’s. Both Ichigo and Renji are pissed as their ear drums are going to burst.

The man says that their heads are held high, he repeats this, then mentions that their head are so high. He tried to rap but miserably failed as both Ichigo and Renji didn’t seem to like Nimaiya Ouetsu. He quickly introduces himself as being the number one Zanpakutou creator, then mentioning Yoroshiku. Then starts rapping about Zanpakutou’s saying that he loves them.

The first place they arrive is the Galaxy Phoenix Palace, there they are introduced by a numerous number of beautiful girls. Kon is quickly enticed mentioning that they’re showing so much skin, they also look so delicious. The girls quickly know who’s who as they know that Ichigo has orange hair and red for Renji.

Kon mentions that it’s heaven, at this point, Ichigo reveals to him that there could be problems here, it could be a catch or something here. Kon quickly tells Ichigo that this is his personal utopia. Nimaiya Ouetsu quickly appears and introduces himself saying that he’s the owner of all this, he’s described as the Blade God.

Nimaiya gets up in Ichigo’s facing mentioning Shikuyoro, then grabs Ichigo’s hand and starts to play with them, he first knocks them and since Ichigo knows the hand movements to the game he also keeps on going. Ichigo asks Renji if he wants to swap, Renji obviously refuses.

Nimaiya quickly detects the vice mentioning that he doesn’t seem to be dig what they’re doing. Nimaiya quickly mentions that they could always go back. Ichigo and Renji talk, both mentioning that it’s a bad idea to be sent out of there. They both say sorry as they don’t want to go back and that the pleasure is all on their side.

Nimaiya doesn’t except that kind of apology as, he shows them how, he fully switched, head on the floor while feet in the air. Ichigo is pissed by this as he doesn’t want to do such a thing but Renji calms Ichigo and tells him that they don’t have a choice. They do it when Nimaiya quickly snaps a picture of them, the girls look at the picture, they’re amused by it.

Ichigo and Renji want Nimaiya to die for doing such a thing. Out of nowhere, a girl appears and kicks Nimaiya on the top of his head, she asks Nimaiya how long he plans on dicking around. Nimaiya then asks her why she did such a thing, mentioning her name to be Mera.

Mera mentions that this will go on forever if Nimaiya has his way, she then asks for Ichigo and Renji to follow her. They enter a different place which is described by Mera as the Real Phoenix Palace. Mera mentions that he couldn’t accept the fact that he’s house is the shit hole he’s currently in. Mera tells them to enter the room, Kon quickly tells Nimaiya that he desperately wanted to be in that room.

Both Ichigo and Renji walk in first, they notice that they’re unable to get out of the room they’re in. Nimaiya starts talking to them mentioning if they’re notice that in their arrival, they haven’t met a single Shinigami other than me. He mentions that all the girls were nothing more than just Zanpakutou’s! Ichigo was unable to realize this.

Nimaiya is interested that Ichigo was unable to distinguish between a Zanpakutou and a Shinigami even though he’s the latter! This message here could explain why Ichigo’s special, he could be some kind of hybrid thing as mentioned by Nimaiya mentioning that he was the end of something!

Nimaiya raises two swords, Ichigo’s and Renji’s up in the air, it was as though they didn’t even notice that Nimaiya had them. Renji is pissed at the fact that he had his sword all along. At this point, Nimaiya starts to smash both their swords together turning them into smaller and more fragile bits.

Nimaiya repeats what he said before mentioning that he’s the number one Zanpakutou creator, he counts down for some reason, he mentions his name once more and that a blade crafted by him can’t be held by a wack ass Shinigami! Ichigo calls Nimaiya a bastard, Nimaiya then repeats the word Shikuyoro when Bleach 522 ends here.

That a impressive chapter, both Ichigo and Renji are going to have a hard time here as they’re going to be battling either their own Zanpakutou or different ones in order for them to realize something really important. Can’t wait for next week’s Bleach 523 when we continue with Nimaiya’s plan!