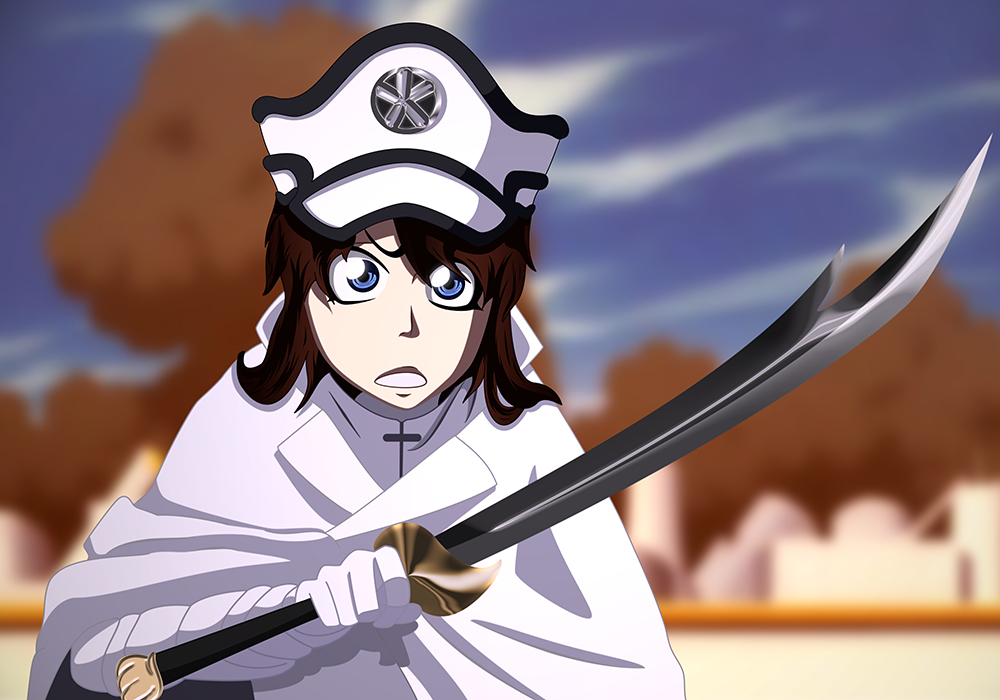 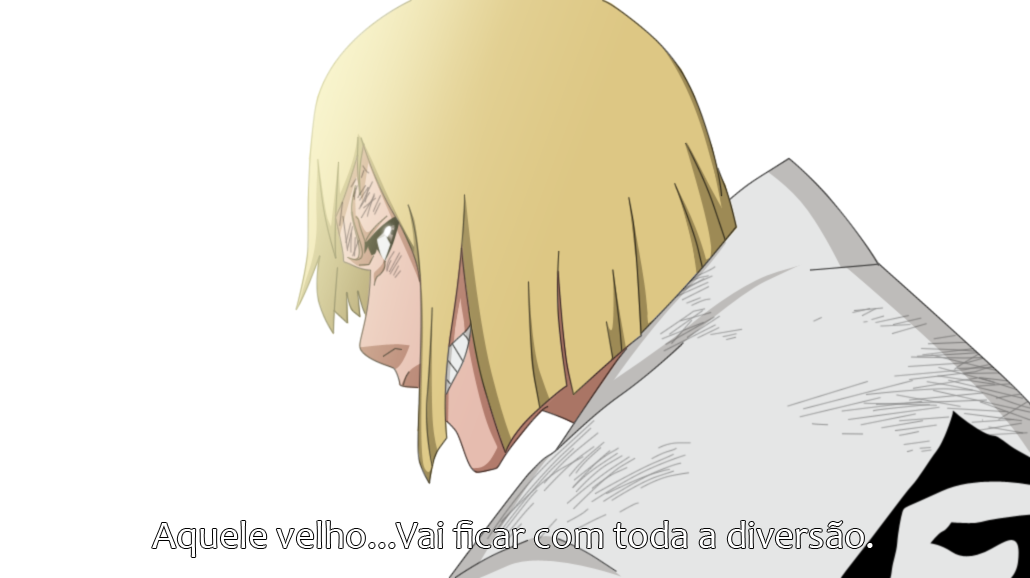 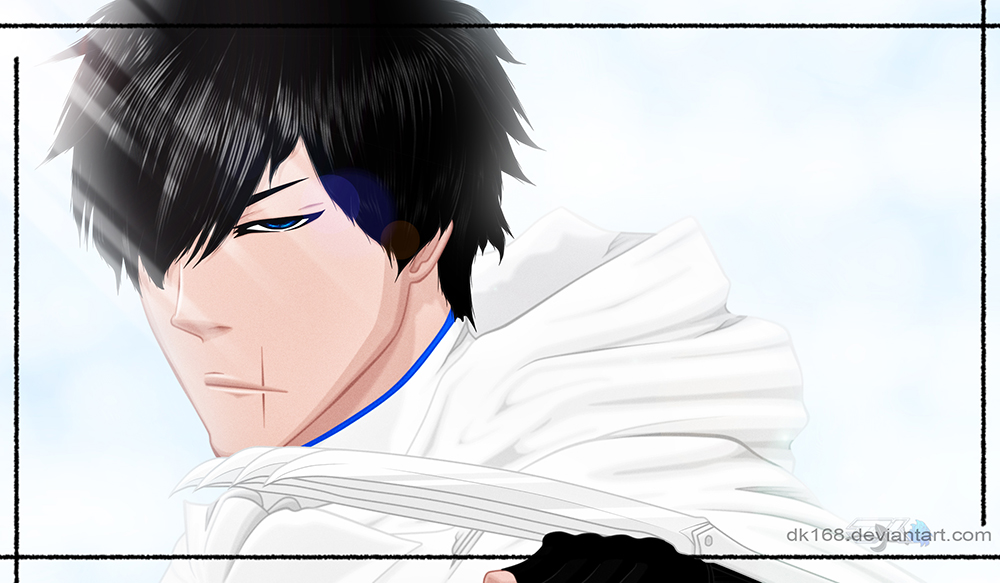 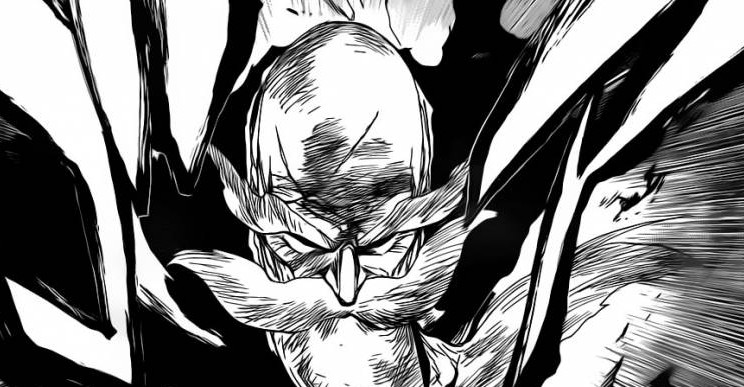 Yamamoto vs Juha Bach (Vandenreich Leader) is finally going to happen! We set our eyes on an enraged Captain Commander where he finally burns Driscoll and goes right to Juha Bach where we notice that Zaraki Kenpachi has been easily beaten by Juha Bach! Yamamoto and Juha Bach get ready to face each other!

Bleach 505 starts off as Driscoll Berci’s body turns into ash as the bones and skin all burn! He says that since he wasn’t able to express his condolences he can do them now as well as release his Bankai from this world to the next. He says he’s good byes.

Yamamoto stands with most of his Shinigami cloths burnt and he looks scary. A piece of text states “The Guardian of Hell, that Turns everything into Ashes”. Hisagi just watches as Yamamoto get’s pissed for what had just happened. He’s shocked at the crazy power Yamamoto has.

Yamamoto walks by Hisagi and says not to worry because he’s now going to kill the Rebel Army with his own hands. Yamamoto jumps off and a large crater is formed as the jumps has such an intense force behind it. Every other captain notices the intense Reiatsu in the air and that it’s a sign that they should fight harder on defeating the Quincy Army.

Sui Fong notices the Spiritual Force, Omaeda asks her whats going on, she tells him that the Captain Commander is enraged! Momo tells Shinji that she’s never sensed Yamamoto so angry, he tells her that he also has never felt such force from him. He also says that he’s never seen the Captain Commander fight at the front before. He tells her to hurry otherwise he will have all the fun!

Toshiro and Matsumoto also feel that Reiatsu, Toshiro Hitsugaya states that as a Captain and Vice-Captain they can’t let them defeat them so easily, Matsumoto agrees. Komamura also gets up after feelings Yamamoto’s presence. He tells all the soldiers of the Gotei to stand up because it’s shameful.

Shunsui wonders what Yamamoto would say at such a situation, he thinks of Yamamoto saying something like how dare he have such a hard time defeating such an enemy, he doesn’t remember raising such a coward. Shunsui powers up at the same time and quickly goes for an attack!

We now see Juha Bach (Vandenreich Leader) holding up a defeated Zaraki Kenpachi! Zaraki has been defeated with such ease. Zaraki seems to have many injuries while Juha Bach is still clean. Juha Bach states that he was one of their Special Potential, he now seems to be very weak, says Juha Bach, he also says that he had overestimated him.

At this point Yamamoto arrives with such force that it melts everything around him, unfortunately Juha Bach hasn’t reacted to it, he seems like he’s not scared. Yamamoto starts to walk towards Juha when the ground itself starts to change at every step! Yamamoto tells Juha that it’s been over 1000 years!

Yamamoto keeps on walking when Juha Bach turns around and looks right at Yamamoto, he smiles as though he was waiting for Yamamoto to arrive and thus he could try to beat Yamamoto to defeat Soul Society. Yamamoto tells Juha Bach that he had arrived there to annihilate him! Bleach 505 ends here.

So we finally find out that Zaraki has been easily defeated! While Yamamoto is angered by all the things the Quincy’s have done, Juha being a lot more powerful than Zaraki means that it’s going to be hard for Yamamoto to defeat him. Can’t wait for Bleach 506 because it’s going to be fantastic to see Juha Bach fight Yamamoto! Or even seeing to see who killed Kirge Opie.