Boruto 13 see’s Tento get kidnapped by the Mujina which means that they want to get a lot of money by trading Tento back to his parents. On top of this, Boruto, Sarada and Mitsuki receive a B-Ranked mission from Konohamaru but Boruto cannot attend as he has to go ahead and help get Tento back when he tries to give his card back. Tento gets saved by Boruto quite quickly. 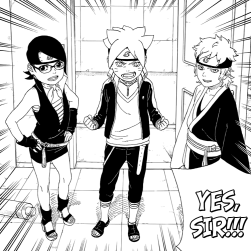 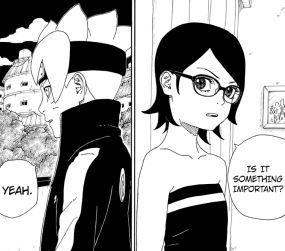 Boruto 13 begins with Boruto talking to Mitsuki and Sarada about his own mission with Tento. They go to meet Konohamaru when they’re told that they have a new B Rank mission, it seems that they learn about how higher ranked individuals take a while to get to that stage of missions. Both Sarada and Boruto both want to get this mission, Konohamaru tells them that they need to do their best, be on guard and show some gust.

Boruto goes home when he notices that he has Tento’s card of his special idol in his pocket (maybe Sasuke), he thinks that it’s nice but he has to give it back. Boruto goes back when he notices and hears that Tento has been kidnapped, the Mujina who are responsible, seem to know everything, it seems like someone within the Ninja’s have their movements under surveillance.

Boruto goes to Sarada’s house, it seems that she’s training in her room, she tries to get all of the points onto the dart board, to which seconds later Boruto appears behind her he gets there to tell her that something came up, he cannot come on the mission, this is when she mentions that Mitsuki and her will complete the mission.

Sarada seems to like this independent and strong side of Boruto. Elsewhere, we see Tento appear, he’s faced with Yamaoka who transforms into Shojoji, it seems like he killed Yamaoka a long time ago using his Shikabane Bushin No Jutsu to use his form, memories and abilities. Shojoji mentions that he’s going to use Tento to trade for money.

Tento falls when he discovers Naruto Uzumaki’s card and a shuriken, he then notices that he has to be strong. He talks about how Shojoji is nothing but a scum, and that by killing himself, he’ll make it a lot easier for his father. But Shojoji mentions that he can just use his technique and absorb Tento but Boruto appears quickly and kicks him and helps Tento out. Boruto 13 appears.

Seems like it’s getting better and better, but I still don’t quite like how the author is using Sarada here and in the previous chapters. Nevertheless it seems like its progressing well enough, seems like next month’s Boruto 14 might be pretty good.