Fairy Tail 521 see’s most of the Alvarez Kingdom’s forces taken down as August appears after all of the other Spriggan have been taken down. August appears on top of the cathedral while Gildarts appears and begins his fight against August. At the same time, we see Natsu go towards Fairy Tail as Gray has already appeared in front of Zeref. 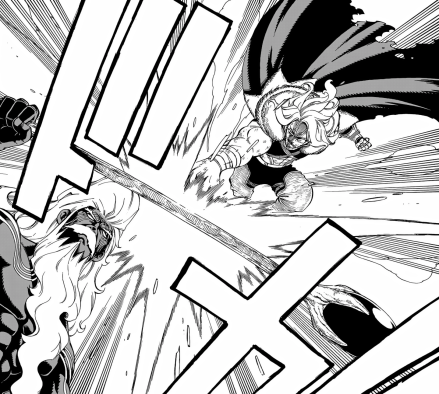 Fairy Tail 521 begins as everyone returns back to Magnolia. Mavis gives everyone the word to stay safe as they fight and defeat their opponents. They know their surroundings, so use it as their advantage to fight the last few from the Alvarez kingdom. Laxus and Makarov are together as they head towards Fairy Tail.

Mirajane defeats Jacob. Elsewhere, Azir also gets defeated by Elfman and Lisanna. All the while, Azir’s grandpa, Yajeel, appears and mentions for this fight to end. Azir can no longer fight, while asking Elfman and Lisanna to take him on instead. He also mentions that this war has seen both sides losing too much.

It seems that both sides are of a family. Elsewhere, Natsu, Lucy and Happy are met by Dimaria and Brandish. Natsu appears to which Dimaria is totally scared of him. Brandish has already decided that she no longer wants to be part of this war, thus she moves on. Lucy mentions that they’ll meet again in the future.

Evergreen along with Porlyusica mentions that Gray seems to have disappeared elsewhere. At the top of the cathedral, we see August stood on top of it, he chants some words where he goes on to mentions that she shall exterminate everyone. On top of which, Brandish remembers what Lucy said about meeting again and how that could not be possible as August will take them all out.

Out of nowhere, something approaches from the sky. It’s Gildarts! He approaches down on August so hard that it destroys the cathedral they’re on. He’s about to fight August, he tells the others that they can leave August to him. Natsu and others go towards Fairy Tail HQ. At the HQ, Zeref sits as Gray approaches, he mentions that he’ll be chucking him out of the guild. Natsu runs towards Zeref too. Fairy Tail 521 ends here.

A pretty good chapter, seems like it’s getting more and more serious. Plus Gildarts vs August will definitely be a battle to watch for. Nevertheless, next week’s Fairy Tail 522, titled “Gray’s Trump Card ” will be awesome as we get to see some Gray vs Zeref.

Leave a Reply to dreager1 Cancel