Fairy Tail 467 see’s the return of Aquarius after both Lucy and Brandish have a fight where Brandish tries to kill Lucy, however Aquarius shows up to save Lucy. On top of which, Dimaria faces against Kagura after they both meet each other in the battle field, both are very strong. 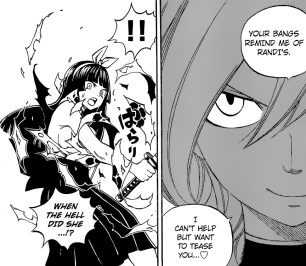 Fairy Tail 467 begins as Leon unleashes his attack on the battlefield, called the Titan’s Feet killing and injuring a lot of people. The Sky God’s Boreas technique along with a lot of spinning is used. Wahl tracks many members then creates rockets to attack those members, he launches them which hurts a lot of people. Kagura intervenes and stops a lot of these rockets.

However, behind her is Dimaria who tries to attack her out of nowhere. Dimaria tells Kagura that her oriental look suits her well. However, when Dimaria unleashes her sword, everyone in the battlefield feels Dimaria’s overwhelming magic power. The moment she drew her blade was when the everyone froze solid.

Out of nowhere, using only her will, Dimaria tears apart Kagura’s clothes as she tries to tease her. Brandish wakes up with Lucy, Cana and Porlyusica. They tell her that they’ve locked up Marin, and helped her come back from what he was doing to her, which was suffocating her to death. Good thing both Cana and Lucy saved her.

Brandish asks why they’d even save her, Lucy mentions that because now they have a bond, they both bathed together. Brandish asks if she’d like to know about Layla, she says that she will only tell Lucy once they release her handcuffs. They do so and close the door behind them. Brandish tells Lucy her name and her mother’s name, Grami.

Grami was once a servant employed by Layla. When Layla retired she gave three of her keys to her servants. Capricorn to Zoldio, Cancer to Spetto and Aquarius to Grami. Her mother admired the key, she cleaned it every day, she also looked up to Layla. However, Layla betrayed her, Brandish mentions.

Lucy mentions that she would never do anything, she mentions that Lucy’s mother, for the sole purpose of recovering Aquarius’ key had murdered Brandish’s mother in cold blood. Out of nowhere, Brandish gets out of bed and jumps onto Lucy. She clenches onto Lucy as she tries to kill her.

A pot of water nearby falls down as it pours all the water. Brandish mentions that she doesn’t bare any grudge against her, it’s just that this will finally allow her to free herself from the pain of losing her mother. She apologizes to Lucy then asks her to die for her. Lucy begins to struggle, the water nearby begins to change and morph into a wave.

It pushes Brandish back as it quickly saves Lucy from the harm of Brandish. Out of nowhere, Lucy is covered, hugged and saved by Aquarius who mentions, what was that she mentioned about her key. Lucy is shocked as she cries in front of Aquarius as she’s somehow returned. Fairy Tail 467 ends here.

A fantastic chapter, after the spoiler chapter I wrote, it seems like it was all correct and more. Can’t wait for next week’s Fairy Tail 468, titled “Memory of the Stars” when we see what’ll happen to Brandish, and if we’ll learn anything new here.