Bleach 641 see’s Mayuri and Nemu talk about how they can fight together in order to defeat Pernida, however after initiating their attack, Pernida uses an ability to restart his hands after Mayuri tried to freeze them. Both Mayuri and Nemu now face a problem as Pernida has the personality and nerves similar to Zaraki, he gets ready to attack them down. 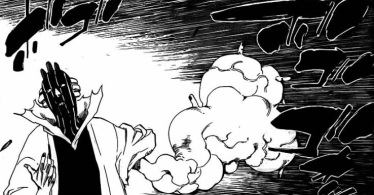 Bleach 641 begins as Nemu gives Mayuri a flesh supplement, she actually mentions that the reason she came out was to give Mayuri this. He injects the liquid inside it into his arm and his hand begins to reform. Mayuri asks if she had realized it from that start that he forgot the flesh supplement.

Nemu had noticed that when they were attached, he didn’t touch the drug stand, which he usually takes from before fights. He realises that she does observe him, calling it creepy. He begins his attack once more when he activates his floating shoes with even more force.

He goes towards Pernida who begins sending out arrows, all three arms begin sending in arrows while Mayuri dodges all of these. He contacts Nemu and tells her that his strategy is to scatter highly concentrated narcotics over the wide area he’s in. He doesn’t know if it’ll work, but the arrows have nerves attached to them.

With his drugs, he can stop the arrows but it seems that it will affect them too. He tells Nemu that her job is to inject a nerve coagulating agent directly into his nerves, it won’t block its communication or block its power. In fact it will force all organs and nerves to be forcefully frozen.

Thus when the drug reaches Pernida, his body will stay as is, its heart and mouth will all stop moving. Mayuri also confirms that Pernida has a blood system flowing inside of it, thus the drug will most likely effectively affect him. The nerves on the ground have been numbed by the narcotics Mayuri spread and thus allowed Nemu to walk over them.

She injects the coagulant into a fallen arrow, which then quickly begins to travel from Pernida to Pernida, it begins to freeze its body. The original body has been frozen, the second one is also down. However, on the third, Pernida quickly cuts his own finger in order to stop the coagulant from reaching it’s entire body.

Pernida tells Mayuri that this is not enough to kill him. Mayuri realises that Pernida is speaking a lot like Zaraki, he realises that controlling Zaraki’s nerves, he’s been able to absorb information from the object it touches. If Pernida’s nerves have evolved up to Zaraki’s level, Nemu’s speed won’t be enough to match it.

This means that Nemu seems to be the next target by the hands of Pernida. Out of nowhere, Pernida bursts out of the shell which was put on him. Mayuri shouts at Nemu to quickly get out of there. Mayuri realises that he’s used the Matai Fukuin Shoutai power in order to release from the trap. Nemu is on the ground with a shocked face, unable to do anything as she tries to jump. Bleach 641 ends here.

A fantastic chapter, Mayuri and Nemu’s relationship is being tested here, and even after coordinating an attack against Pernida, it seems that he’s coming back even stronger using Zaraki’s nerves. I honestly can’t wait for next week’s Bleach 642, which will show the continuation of this awesome battle.

Leave a Reply to nickdunnaquatic Cancel