Fairy Tail 449 see’s the past and explanation from Mavis, as she meets with Zeref around a 100 years from the current time. Zeref goes on to tell Mavis that the curse she had used caused both for her body to stop aging while also becoming immortal, just like him. Zeref reveals to Mavis that she still doesn’t know the true meaning of her curse and lives around her. 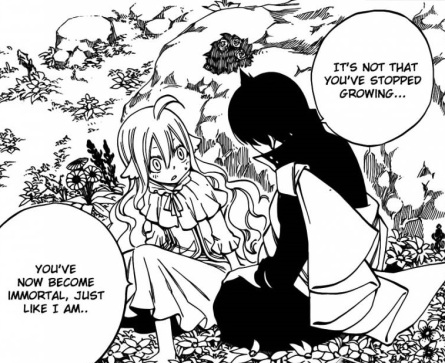 Fairy Tail 449 begins around a hundred years ago when they were driven out of Magnolia, that is when they met Zeref who helped them learn magic in order to defeat the dark guild in the village. Mavis used a black magic spell that was still incomplete, although they won.

Mavis paid the price when her body stopped aging. A while after, Fairy Tail guild formed. During that time the second trade war began as soldiers and mages took part in this battle. All while Mavis was the tactician who showed promise when she won most/all of her matches. Members of Fairy Tail also saw their own hand in these wars as they took part in defeating the enemy.

They won, they all drink and celebrate back in the guild. However, Mavis is upset when she’d like to go on an adventure. The council also changed a few things when they ruled that wizard guilds would not be able to take part of wars. 6 years later, we see Mavis somehow meet with Zeref out of nowhere, they’re both happy to see each other.

Mavis runs towards Zeref and hugs him as she tells him that they won because of him in Magnolia. And due to that, she was able to save her friends. They sit down and talk, he tells her his name when his story also follows up on how he’s a bad person and so on, he reveals that it’s all quite accurate.

However, Mavis just tells him that he has kind eyes, and doesn’t believe those rumors. She also reveals that Yuriy is going to be a father soon, a boy. It’s been 10 years now, as she mentions that for what she did, she’s had to pay a price as she mentions that using an incomplete black magic froze her body.

Zeref asks if she used “Rou” to which then he connects his head to hers, he quickly learns that not only has her body stopped growing, but now she’s also become immortal, just like him. He asks if she knows the type of lives she’ll be taking. He goes on to mention that it’s a curse of Ankhseram, the more you value life, the more it’ll take.

Mavis mentions that no one around her has died, to which Zeref mentions that there was a war a while back, this could have been her doing. War makes you see lives in a different way, maybe that’s why she hasn’t noticed it quite yet. Mavis is frustrated as Zeref tells her that she doesn’t know the true meaning behind taking a life.

The power to walk alongside her. We see a flower wilt due to Mavis reacting to what Zeref just said. Mavis tells herself that life is precious, important, and that lives of her friends she loves are precious. At the guild, we go on ahead and see that Yuriy and his partner has given birth to a boy. Fairy Tail 449 ends here.

A brilliant chapter as we get ever closer to seeing what the true secret is for Fairy Tail and what Fairy Heart really is. Could Mavis’ body really be something that can eradicate the whole continent, this being the real secret behind Fairy Heart? Can’t wait for next week’s Fairy Tail 450, titled “The One And Only In This World”.