Naruto is one of my favourite anime’s, it has a number of great and fantastic battles, so here are my top 5 Naruto battles based on the anime and manga. The Naruto manga series ended with a total of 700 fantastic chapters, so here is an article of what I think are the top five Naruto battles which may or may not include fights yet seen in the anime.

The battle between Naruto vs Pain was definitely something to spectate, it showed Naruto’s new abilities and passion to save as many people as he could. He was able to cope with the power Pain controlled by Nagato was able to swiftly and amazingly able to kill a large number of Leaf Ninja’s, then through Naruto’s words he was able to bring everyone back to life. The fight even went as far as to bring a large-sized Kurama to the stage when Naruto nearly ripped his own seal open, that’s when we met Naruto’s father for the first time.

The one fight that made me happy to be a Naruto anime fan, it was probably the first amazing fight which triggered Naruto’s determination into making everyone he see’s his friend or family. He saved both Sasuke and Sakura and even made Gaara open his heart to a number of things, even helped Gaara land the Kazekage gig as well as made him learn and help his own village, friends and family what it means to become true and happy. I really liked this battle. 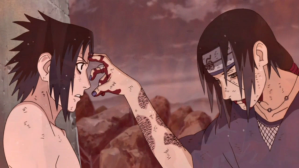 Sasuke vs Itachi was an on and off for most of the first part of Naruto, Itachi made sure that Sasuke grew strong however in turn made him turn evil and follow a path that he never intended. In turn it made the Sasuke vs Itachi battle even more awesome when Sasuke was able to kill his own brother for the first time. However, as time went on, Obito intervened and Sasuke learned a lot about Itachi. During the Edo Tensei arc we learned a lot about them, even after his death he was able to tells Sasuke to live for the village, even if it’s a battle we’re talking about here, it was a lot more than that.

Naruto vs Sasuke has always been a fight to set your eyes on, ever since Naruto and Sasuke fought at the valley, Naruto and Sasuke went from comrades to rivals to Naruto promising Sakura to bring him back. These fights were more of a race to who’s stronger and who can become stronger quickest. Naruto seemed weak most of these times but when Naruto and Sasuke fought at the end of the manga chapters, it was truly something awesome. After they’d sealed Kaguya and defeated Madara, it was their turn to find out who is correct, it turned out that there is more here then what we can see as they finally reconnected once again. Less of a battle and more of becoming brothers.

Top One: Naruto and Sasuke vs Madara Uchiha 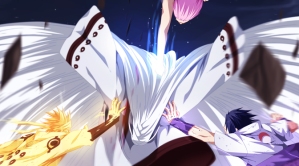 To me Kaguya Otsutsuki is a force that cannot be defeated. It’s something that Naruto and Sasuke could have not completed alone. Their help from Hagoromo, Obito, Kakashi and others is the thing that allowed them to defeat her, not kill though. It’s known that such a large force cannot just vanish, so she’s definitely still alive possibly planning her way back. But still with Naruto and Sasuke around, it’ll be really hard for her seal to break and rule over humanity once more. I mentioned this as a memorable battle as it’s one of the better fights in Naruto which deserves a spot here but isn’t quite right that it should be the first spot. There is more of Kaguya that we need to know in order for me to put her in a top 5 Naruto battles.

So, what do you think? do you agree with my decisions based on both the Naruto anime and manga, are there any other battles that you think I should have considered? Go ahead and comment below telling me what you think. Let’s talk about Naruto fights. Also be sure to share to your favourite social networks.