Fairy Tail 384 startles as all three Celestial Spirits are able to stick around and Lucy doesn’t seem to affected by it either, she is told by Aquarius that the only way to defeat them is to summon the Celestial Spirit King. The way to do this is to break a gold key, to which Aquarius sacrifices and tells her to break hers. Once the Celestial King appears, hell is about to get loose as he and the Demon King will rumble it out. 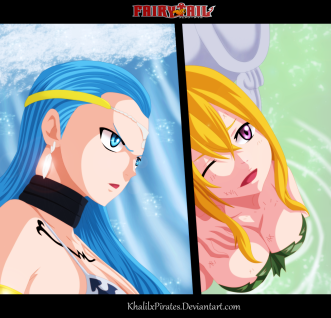 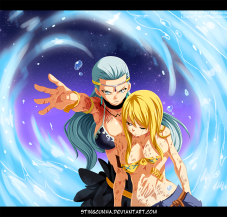 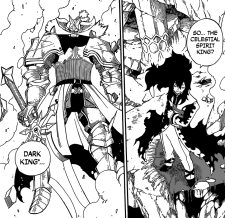 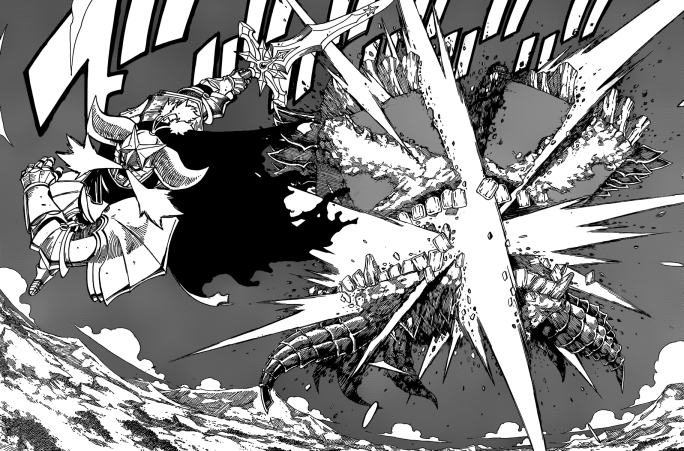 Fairy Tail 384 begins as Aquarius shows to which Loki and Virgo are both shocked to see Lucy being able to bring three different Spirits to this world. Aquarius seems that she’s ready to die after opening all three games. Jackal is targeted by her water, while at the same time Virgo tells Lucy to close one of the gates since she still can.

At the same time we see Torafusa swim through the water to which Aquarius is shocked to see since her water is special, however he reveals that the water is his field of expertise. He attacks her, while Jackal appears behind Loki and Virgo, they both get hit by his explosion, and with just one attack they’re all taken out.

Seems like she’s done for as there is no one that can help her with this fight. Lucy’s foot is exploded to prevent her from running anywhere. They joke around, from here on out Torafusa mentions if he won’t kill her, he will do it himself, he then just moves out of there. Lamy grabs Lucy and tries to get her up.

From then Jackal grabs Lamy’s face and blows her up as well, however when Jackal tells Lucy that she should worry about herself, Aquarius appears and helps her once more. Pushing Jackal back as much as she can, Aquarius mentions that the others are really strong as well.

It’s called the Substitution Summoning Technique whereby breaking one of the gold keys will open the gate of the Spirit King, it won’t work with any key, it has to be a strong key that has a strong mutual trust between the owner and spirit. Aquarius then mentions that she can break her key. Lucy begins to say no that she won’t do it.

She was the spirit of her mother Leila, she was graceful, however when she was handed down to Lucy she was disappointed. Telling her that she couldn’t endure anything, and doesn’t even know how the world works. She’s been hating Lucy this whole time, Lucy tells her that she doesn’t care if she hates her, she still likes her, and on top of this she is her friend.

Aquarius tells her that she needs to stop relying on others, only she can save her friends now. While they talk, Lucy begins to cry and thus Aquarius shouts at Lucy to break her key to which Lucy begins to call out for the Spirit King. Aquarius thanks her for everything she’s done for her.

The water vanishes and the key breaks. From the sky a bright light is shown from which we notice the Celestial Spirit King arrive with his massive sword, he cuts through the large cube and after a few cuts we see a large number of parts from the cube sliced through fully. Silver and Kyouka notice that Plutogrim (cube) has been cut. At the same time, the Demon King and the Spirit King both meet. It seems that they’ll fight! Fairy Tail 384 ends here.

What a great chapter, and since Lucy was able to bring out 3 of her keys at once, she is definitely powerful, on top of that we know that the Spirit King and Demon King will definitely fight during next week’s Fairy Tail 385, titled “Spirit King vs King of Hades”.