Naruto Shippuden 342 shows part of Tobi’s mask to finally crack! After Kakashi notices what had quickly happened in such a short moment we see the truth behind the Space-Time Technique, it’s more than just to suck things, it’s in fact what Tobi uses in order to not get injured, however as Kakashi discovers, sending his Kunai and Naruto’s Rasengan to the same place will injure Tobi, this obviously asks the question to who Tobi really is? Kurama mentions that Naruto’s can control all of his power and thus he finally gets the ability to use his Bijuu Mode! 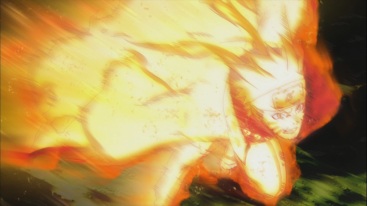 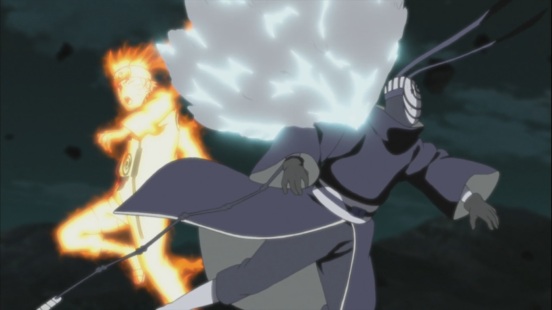 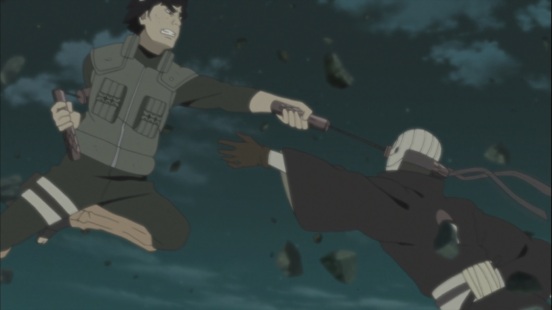 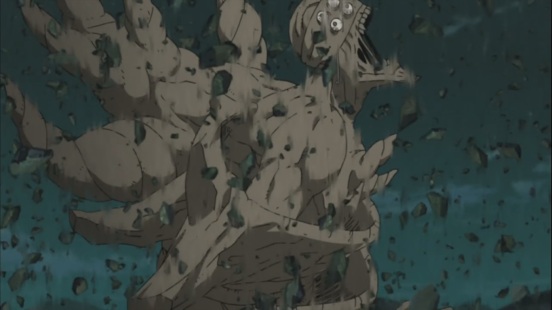 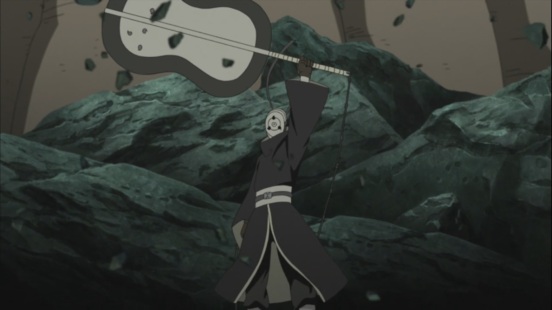 Naruto Shippuden 342 begins as Naruto remembers his most precious moments when Minato, Kushina and Jiraiya were with him taking care of him. He also remembers that he has heroes who he looks up to which he wants to become Hokage, this is he’s dream. He attacks but it’s stopped by Tobi. He mentions that the Gedo Mazo will not be touched while at the same time the statue begins to change and form itself into a new form.

Naruto creates a close and gets a Mini Bijuu Bomb going while all the flying rocks have stopped in mid-air. Kakashi and Guy give him advice not to use big moves as they’ll go to waste. Kakashi is lifted up by Bee to which he gets more chakra. Guy comes to help Naruto. Tobi goes to hurt Naruto when Guy also attacks, they go through each other.

Kakashi uses his Raikiri to cut through the rock and throws it towards Tobi’s head. It passes through and kicked towards Naruto to which Kakashi uses his Kamui to get rid of it. From here on we see Tobi turn around from this however we then see a small crack on his mask, it seems that Naruto did get an attack however Kakashi doesn’t think so. Kakashi mentions that there is something that it could be and that he’d like to try something.

Bee tries to attack the Gedo Mazo but is blocked by a barrier and he’s hurt himself. Kakashi asks himself if it could really be something he’s thinking off. It could be due to his Kamui that cracked the mask. Naruto, Kakashi and Guy all go for Tobi to which Guy attacks first, he’s attacks are blocked and he begins to sucks it all in, however Naruto appears with a Rasengan to which they both dematerialized and Kakashi takes the Rasengan away to which after a few months Tobi’s shoulder ignites in light and he’s hurt!

Kakashi mentions that it’s all one jutsu, when he absorbs something it’s the same as his going through walls. He uses the ability to send the part of his body that overlaps towards the other world and that he won’t be hurt. From this both Kakashi and Tobi’s techniques are linked. They wonder who this could be, Kakashi has an idea since they’re linked. Kakashi asks where he got these eyes to which he mentions that it was from Kannabi Bridge where Kakashi first got his name!

Kakashi is shocked that it could be someone he knows! Kakashi begins to breathe heavily to which he’s shocked about however Naruto steps forward to mention that he told him that he’s not giving up on being a Hokage, to which all smile at his dream. Kurama mentions to Naruto to switch to which he mentions to Tobi that he believe in Naruto and that he was entrusted with him, to which he mentions that he is able to manipulate all of his power to which Naruto begins to change and grow and enables his awesome Bijuu Mode! He goes for the attack when Naruto Shippuden 342 ends here.

What an incredible episode, and it’s nice to see that Naruto is finally getting some awesome powers, it’s nice to see Naruto move on from his Chakra mode, which was always a lot weaker. Plus it’s crazy to see that we’re getting closer and closer to seeing the person behind the mask. I can’t wait for next week’s Naruto Shippuden 343, titled “Who Are You?”, when we find out who this man is, as well as the story behind him.