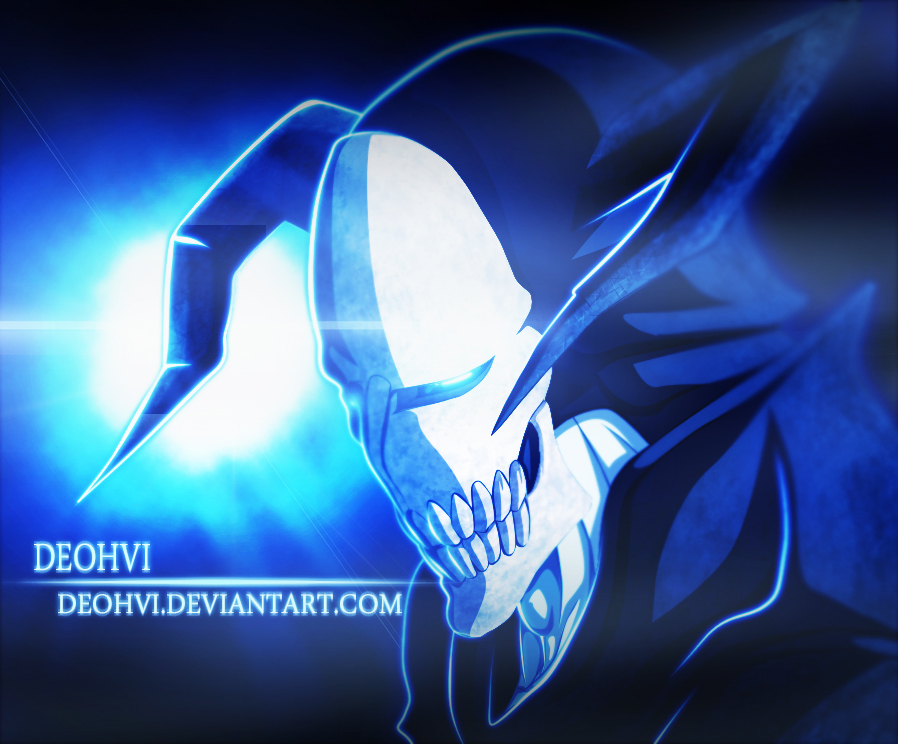 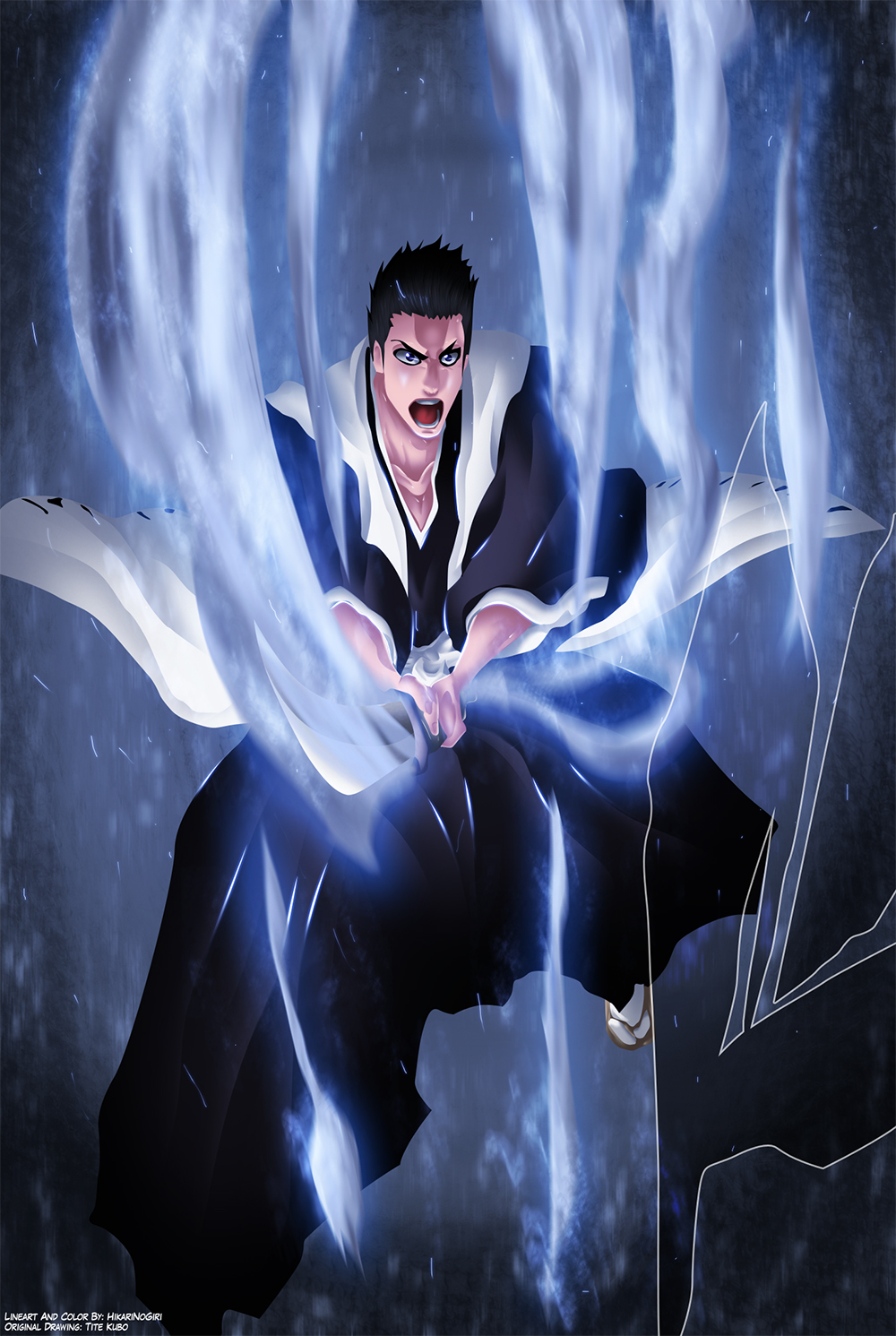 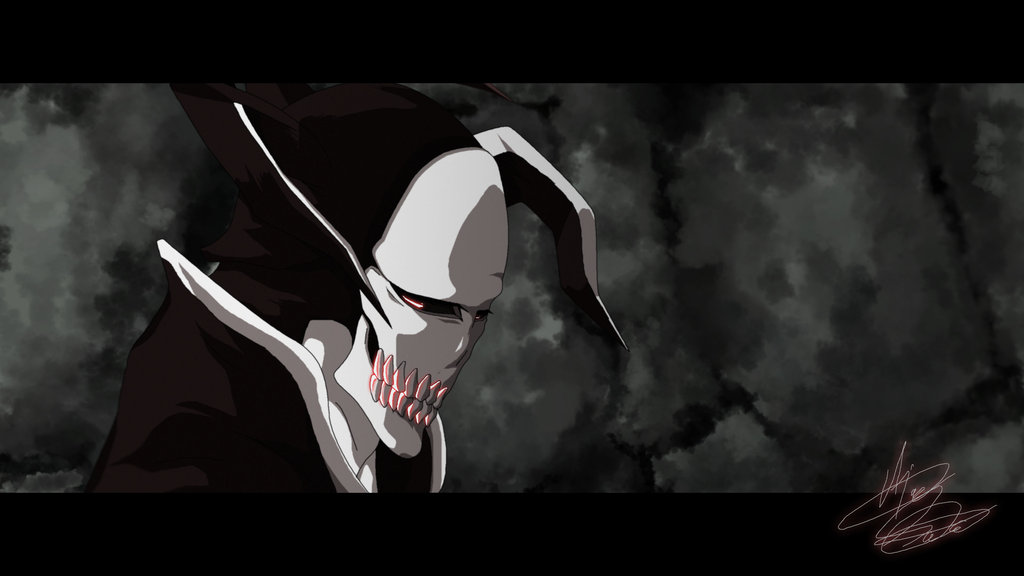 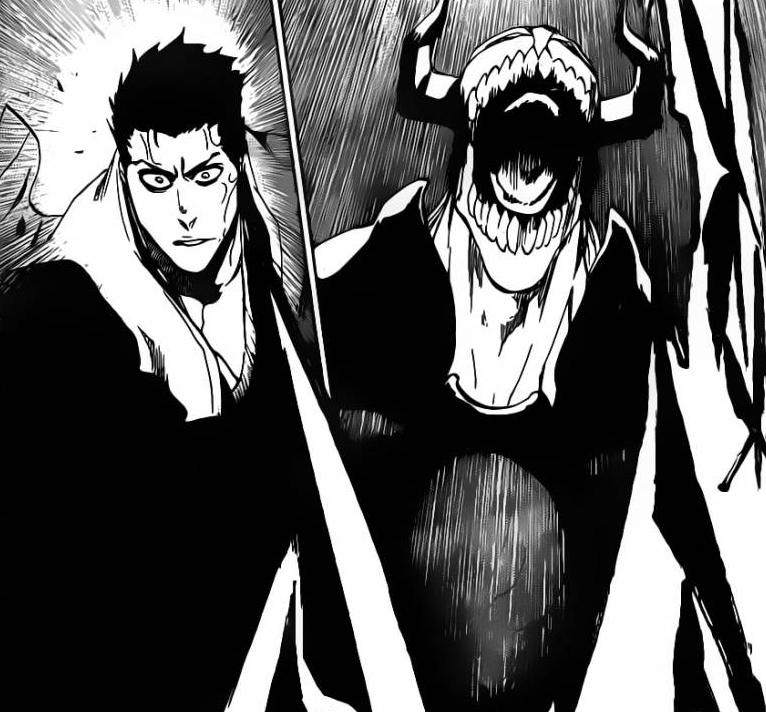 Bleach 531 hints at the awesome past with Isshin going head to head with the Black Hollow which has appeared. Masaki and Ryuken get ready to go to help who ever there is at that point. We notice at the last possible moment that Aizen with Gin and Kaname have arrived, they attack Isshin from the back, he’s put down until Aizen could face the Black Hollow.

Bleach 531 begins with Isshin and the Hollow facing each other. Isshin tries to identify it but is unable to, thus gives it a name describing by its looks, The Black Hollow. It scarily looks at Isshin and opens it awesome mouth to produce the scary Hollow noise, similar to that of Ichigo when he fought Ulquiorra. IT screams out of nowhere, seemingly it seems like there could be a person inside this hollow.

Isshin deduces that it’s completely black, and its Hollow hole seems to be closed, however its reiatsu is definitely of a Hollow. It goes after Isshin, at such speed, fortunately Isshin was able to quickly draw his sword out in time. Aizen watches from his computer screen as Isshin fights.

Masaki notices a reiatsu, it seems like it’s getting closer and closer, a Hollow and another one. She quickly runs out of her room and tries to go out side when Ryuken notices her going, he asks her where she’s headed too. He then mentions that there is no need to ask as he’s also noticed that there are Shinigami outside he mentions that they should only go out after they’ve died. Even if something happens, Katagiri and the others can sort things out.

Ryuken tells her that she should be more aware of her position, he asks her if she understands what she’s doing, she should care more about herself, thus their Reinbluetigen Quincy blood shouldn’t go to waste so easily. Masaki quickly shouts to Ryuken that she has her own reasons.

Isshin’s keeps on being pushed back, attack after attack, it seems like Isshin can’t do much,  except defend himself. He tries to deduce what it is, mentioning that its physical appearance is still somehow that of a hollow, but it feels as though he’s fighting an Shinigami.

He’s called out by another Shinigami, she asks what he’s doing there, currently Karakura town is under the jurisdiction of the 13th division. He notices that what’s quickly going on, the Hollow quickly passes Isshin and quickly goes to attack the woman, she’s quickly told to run but somehow the Hollow creates a Cero and it seems like it completely destroyed her.

Masaki looks at Ryuken, she quickly runs knowing that she can still help, Masaki tells Ryuken that the before action he thinks about his aunt, the Quincy, the future and many other things, she admires thins, but she’s not him. To Masaki, caring about herself means that she’s going to do everything in her power every day to help.

If today shes unable to do something because of some custom and they die, tomorrow she won’t be able to forgive herself. Ryuken looks her, he contacts Katagiri, calling her out and telling her to get the Reishi armor ready. It seems like he’s also going to help.

Isshin notices that what just happened could have been a Cero, he also notices that what he’s fighting isn’t a hollow, as it’s got features related to menos. He attacks from behind, and still it blocks. He asks the monster, there is no chance for such a monster to exist without Soul Society knowing, someone must be sheltering him, who’s pulling the strings he asks.

The Hollow doesn’t answer, he doesn’t care if can talk or not, he’s going to slash him anyway. Isshin activates his Shikai, mentioning Burn, Engetsu! A fiery circular thing appears surrounding Isshin, however as Isshin goes to attack, we notice that he’s already been attacked from someone else. He falls and we notice Aizen’s sword out. Bleach 531 ends here!

What a fantastic change in the story, Aizen seems to be getting his hands dirty, and it seems like Ryuken and Masaki may do some real damage later on, it could also mean that they will notice Aizen, Gin and Kaname and tells Isshin after he wakes up, can’t wait for next week’s Bleach 532 when the incredible manga continues.