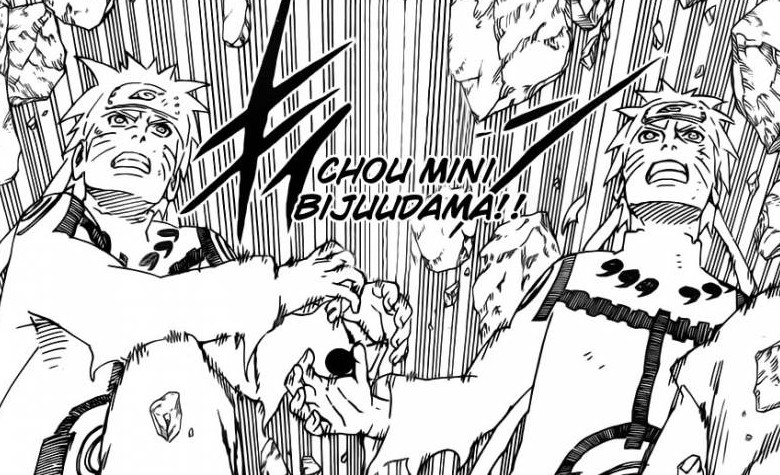 Naruto 595 continues on from last week’s fight with Naruto vs Tobi. The fight continues as Naruto gets into his fantastic Bijuu Mode to fight the terribly powerful Tobi. They keep on fighting but at each point Tobi seems to counter attack any and all attacks purposed by Naruto, Kakashi or Guy.

Naruto 595 starts out as the Gedo Mazo screams out to the top of his lungs as he’s being used as the vessel to bring back the Ten Tails! Kakashi and Guy notice that the Gedo Mazo is bleeding from its eyes due to the amount of pain it must be in. Naruto looks at Tobi, Tobi does the same and looks back to Naruto, it seems it’s finally time to fight, putting everything at stake!

Naruto transforms into his Bijuu Mode then makes a copy using his Shadow Clone technique. Kakashi asks Naruto if he knows about his power. Kakashi tells him that he has to aim for when he’s about to absorb, when he’s at a solid state, because normal attacks will just slip through him. Guy tells Naruto that he must feint in order to capture Tobi within his technique. Naruto tells them that he knows what to do.

Naruto’s clone goes for the attack but fails as he slips thorough Tobi. Tobi then takes out his Gunbai to smack the clone into dust. He disappears when the real Naruto is coming, he stretches his arm but that goes through Tobi too. Tobi goes towards Naruto when Guy appears above them, he uses his nunchucks to place one of them in Tobi’s head so he doesn’t capture Naruto.

Tobi goes through Naruto when Guy smacks one of his nunchucks on the Gunbai, Tobi deflects his technique. Tobi throws some Kunai’s which Guy deflects.Guys goes to attack and both of them have a one to one match where they throw some punches, Tobi goes through Guy and tries to attack from behind, but Guy protects himself by placing the nunchucks there.

Naruto getting some time quickly uses his Mini Bijuu Dama to attack Tobi. Somewhere else, Kakashi is trying to kill the Gedo Mazo, he enables his Mangekyou Sharingan. Tobi escapes Naruto’s Mini Bijuu Dama attack. Kakashi tries to suck in by sing his technique but fails as Tobi somehow disables the use of that technique.

Tobi uses a technique to allow for the disappearance of the Gedo Mazo, it seems that Naruto is able to detect where it’s gone with his high spiritual powers. Naruto keeps going up when Tobi just keeps following him to capture him. Naruto notices that Tobi uses his Gunbai to capture Naruto by blocking his escape way.

Guy notices that it’s hard for them to get to Naruto because the rocks are in the way falling from the sky. Kakashi takes a Kunai out and enables his famous Raikiri on it. As Naruto tries to keep calm, Kakashi cuts through the rocks using the kunai and his Raikiri. Kakashi launches the Raikiri kunai at Tobi while Tobi starts to get his hands on Naruto.

The Kunai gets to his head when Tobi’s hands gets to Naruto. Naruto backs off a bit when Tobi uses the power of the kunai to redirect it to Naruto. Kakashi uses his Mangekyou Sharingan to dissolve the kunai so it doesn’t hurt Naruto.

At this point of materialization, Naruto quickly uses his extended arm to direct his hit to Tobi’s head. Tobi drops to his feet on the ground, Kakashi and Guy get back together, Kakashi asks how they can beat him even when that kind of attack doesn’t work on him. At this point a crack within Tobi’s mask is revealed! Naruto 595 ends here!

WOW the first sign that Tobi is human appears! The cracks proves next time Naruto will use an even more powerful technique to knock that mask off Tobi’s face! Hopefully this is the first piece evidence we get that Tobi’s mask will be coming off soon! Seriously can’t wait for next week’s Naruto 596 chapter! It’s going to be epic!