Fairy Tail 477 see’s the disappearance of many members of Fairy Tail except for Mavis when Jacob intentionally puts them into another dimension. Lucy, Natsu and Happy are all helped by one of her spirits. Jacob attacks Lucy but Natsu appears mentioning that he will definitely deal with Jacob Lessio. 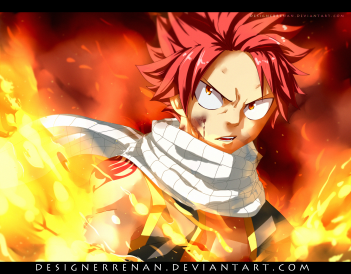 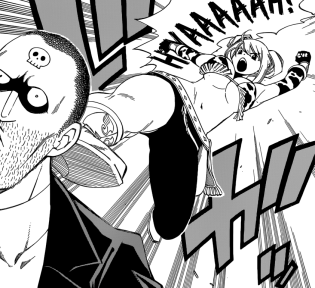 Fairy Tail 477 begins as both Lucy and Happy are still with Natsu as he sleeps. The guild hears some good news as only 7 Spriggan’s remain for them to defeat. Makarov mentions that they’re rumbustious brats. Makarov asks Mavis what is troubling her, she replies that the East and the members there aren’t moving.

Out of nowhere, we see Jacob move in and go into the building. He comments on the smell on alcohol, he introduces himself as an enemy. Everyone is shocked at what’s happening, as he mentions that August set everything up as they’ve made much more progress then they should. It allowed them to move much more and thus he’s there to get rid of some of them to make August’s job a lot easier.

He asks for some booze when Makarov mentions that he shall have none, Jacob then mentions that as a assassin, he is capable of a lot. He slaps both his hands together when a flash a light shoves everyone back as a dark ring appears outside the guild. Out of nowhere, everyone disappears, and the only one left is none other than Mavis.

Mavis tries to call for them when Jacob notices that there is someone there, he thus predicts and somehow manages to hurt Mavis. Mavis is shocked that he’s able to hurt her even if he’s not in the guild. thus as he begins to hurt Mavis, or as he calls her the Fairy Heart, we see that the true Fairy Heart, and Mavis’ real body is shattering and being hurt.

Jacob asks where her body is, this is when he gives her two options, the first is to tell him and he will let Fairy Tail members go, or kill them as well as her losing her life. Saying this,  we see Lucy show up out of nowhere, she kicks him in the head. At this point, Lucy saves Mavis. We see how Lucy had survived the attack from Jacob.

Horologium had showed up and helped them as a distortion in the space around them had appeared, and he saved them. Thus Lucy figures out that he put all of them into a spirit cage. Mavis is told by Jacob that he’d like to change his bargaining, he shall kill Lucy or she has to surrender the Fairy Heart.

Jacob then throws a knife at Lucy as he mentions that if she doesn’t surrender, there will be nothing left except for a head. However, Natsu shows up and stops the attack, his heat melts the thrown knife as he mentions that even if a head is left, Lucy would still be Lucy. Thus Natsu will go up against Jacob as he’s charged up and ready to go. Fairy Tail 477 ends here.

A pretty awesome chapter if I say so myself, Natsu is back again and ready to save some ass, as usual. And He’s probably ready to kick Jacob’s ass for what he did to everyone at the guild. On top of which, I can’t wait for next week’s Fairy Tail 478, titled “Stealth” when we learn more about Jacob’s magic.