Fairy Tail 236 see’s the start of a magnificent battle between Natsu vs Jackal as Michello is targeted by Jackal for information, as well as there being a mysterious factor called Face, or referred to as White Legacy. Natsu and Jackal battle when Jackal takes out Natsu, some time later Natsu comes back even harder as he’s able to engulf Jackal’s explosion. 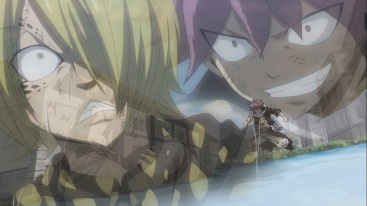 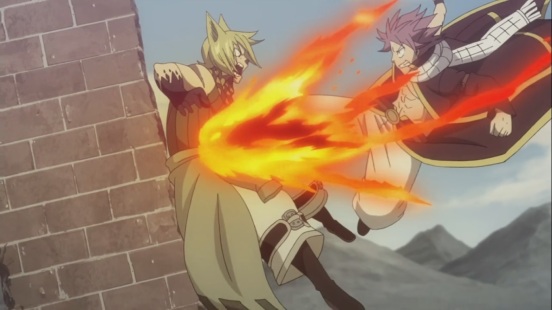 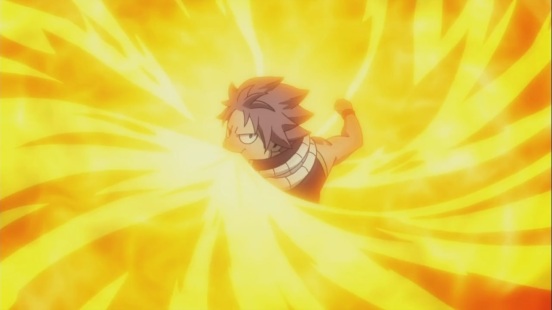 Fairy Tail 236 begins as Jackal steps back and shows off his power as he uses it to bring down the whole village with his explosion. Natsu is seriously pissed off with what’s going on, Natsu jumps in action, Jackal targets him but he can eat the fire.

Natsu keeps on beating him down, hit after hit. Michello realises that Natsu’s really strong. As Jackal is about to speak, Natsu smacks him into the ground and keeps on attacking till he’s seriously out of it. Michello is scared that Tartarus might be after Face.

Michello wants to go and hide, however Jackal gets up and begins to talk to him. He tells Natsu that he’s hands and legs are all cursed now, they’re about to explode. Everyone gets back as Natsu’s body explodes, he’s unconscious. Jackal thought his body disperse.

Natsu down, Wendy and Lucy get in the middle to stop him. Wendy uses her roar but Jackal’s explosion just helps him disperse it. Michello runs into the village. Lucy goes on to bring out Scorpio, he uses his sand buster but it doesn’t do anything. It just adds sand to the mix.

Jackal tells that he uses curses as his power, it’s much stronger than magic. He moves and causes a large explosion on Wendy and Lucy, they’re both down. Lucy tells Wendy to help bring Natsu back, she goes towards him in order to help Michello. Michello meets with the villagers demanding help from them as he’s been protecting them as a council member.

Jackal appears, so does Lucy. She’s quickly placed on a curse mark, if she moves she will explode. Jackal picks two people, Michello and a random person. He asks Lucy which one she’d like to detonate. The lady has a baby while Michello is in the other one. All this happens while Natsu is getting help from Wendy.

Lucy is pushed to choose, as she’s stressed about the situation, Natsu shows up telling him that he’d like to take care of him. With such a hard punch, Natsu was able to bring the curse down. Natsu then punches Michello out due to his annoyance. Natsu touched Jackal that he’s now going to explode. Natsu mentions that he’s got the hang of it and explodes surviving. Fairy Tail 236 ends here.

A pretty good episode, Natsu is strong as ever, and seeing as Jackal is also one hell of a Tartarus demon member, it’s going to be tricky for Natsu to win against next week’s Fairy Tail 237, titled “Tartarus Arc (Prologue): Natsu versus Jackal”. Should be fun.