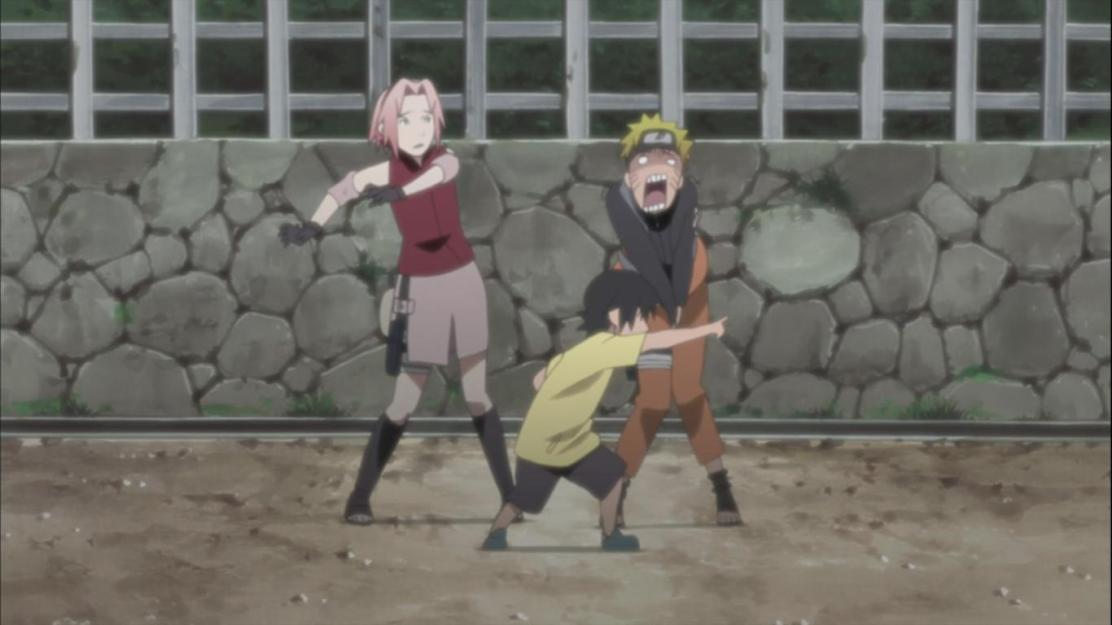 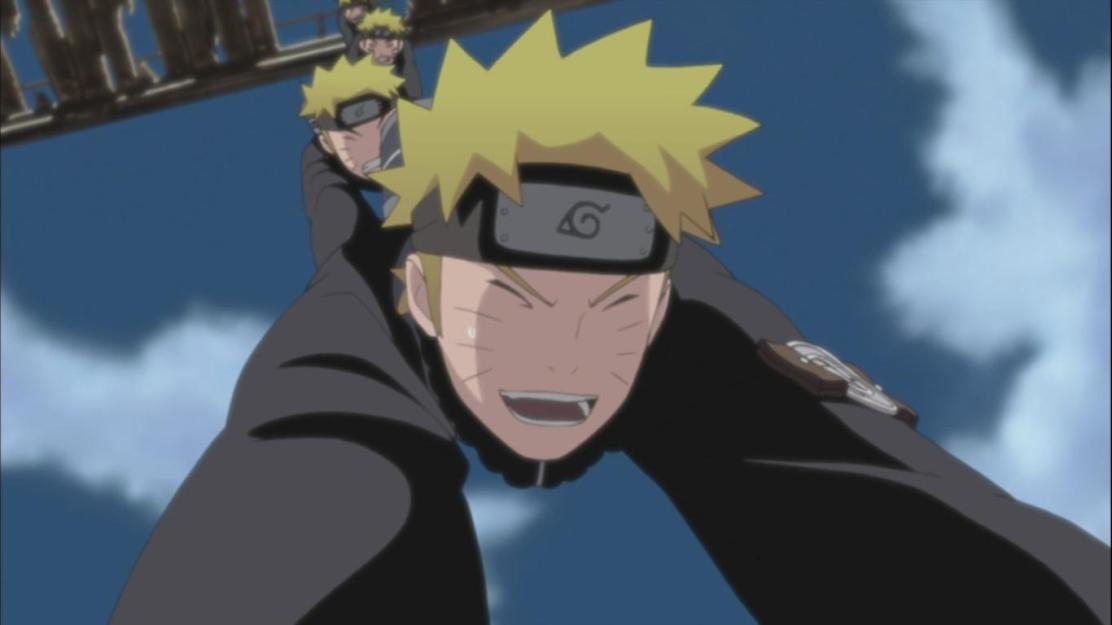 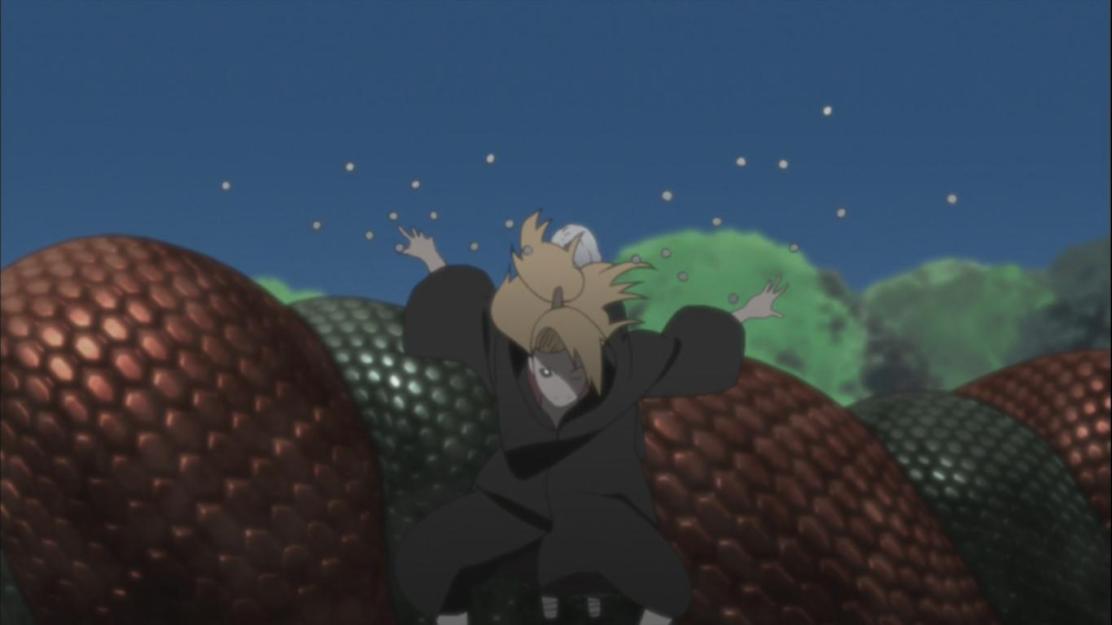 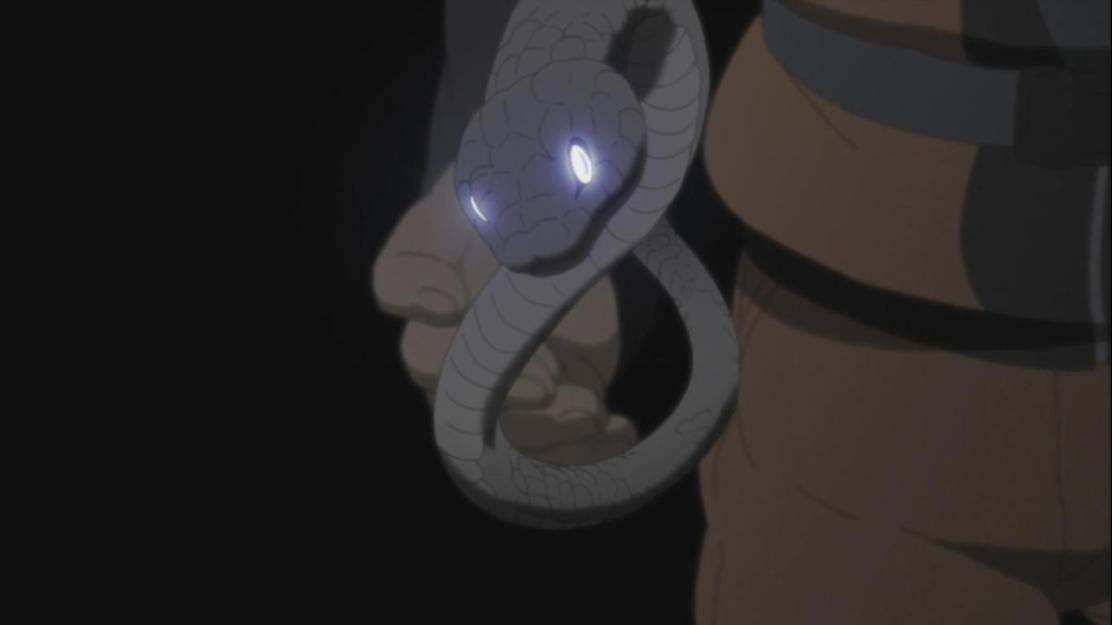 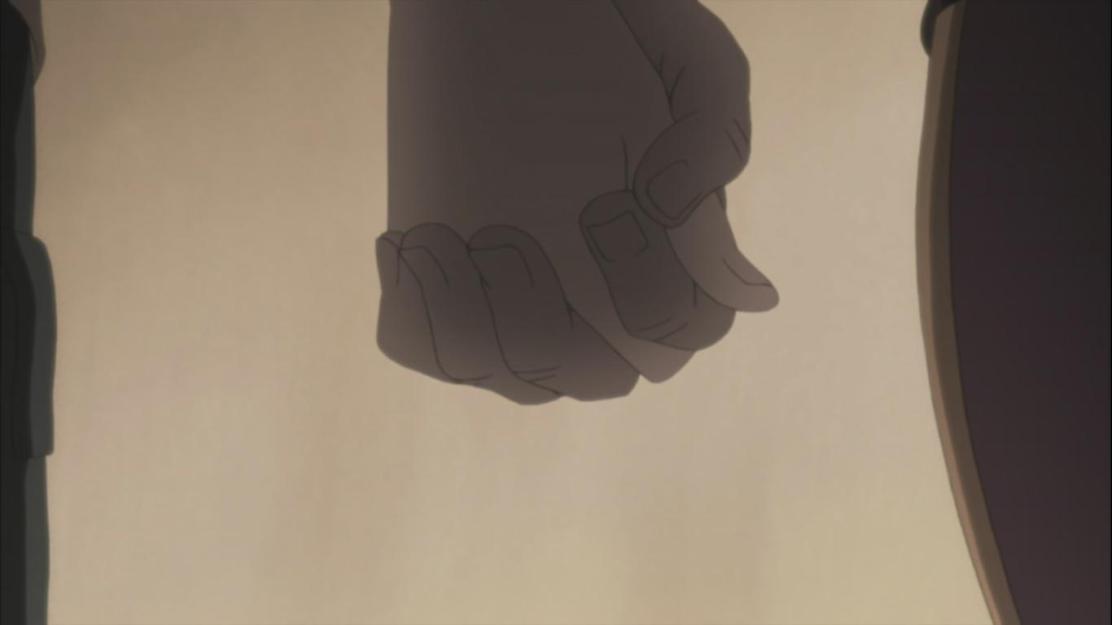 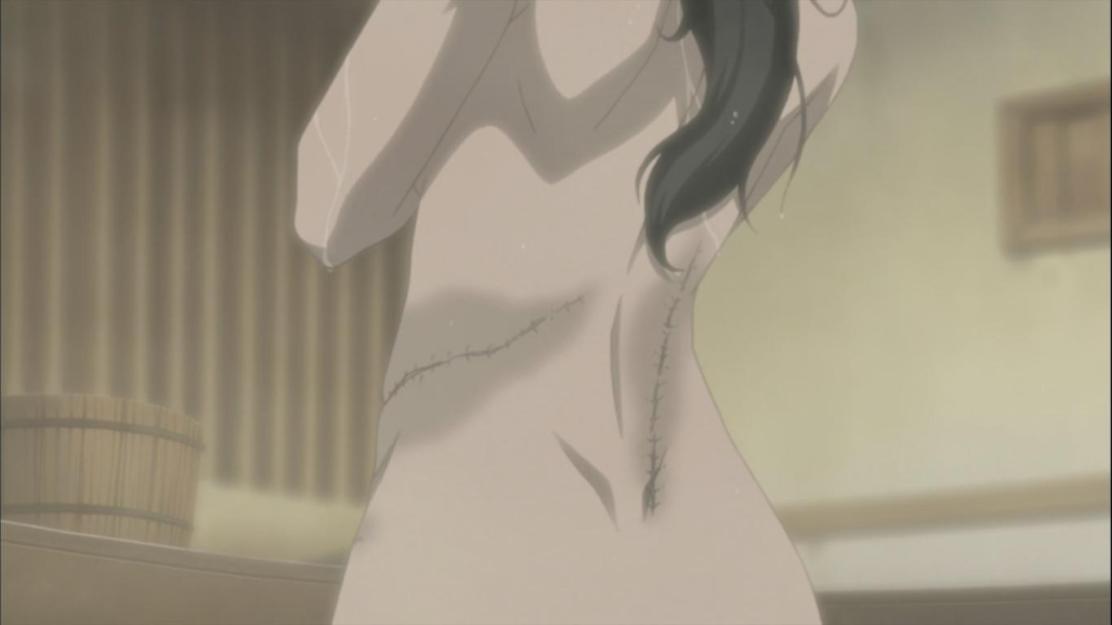 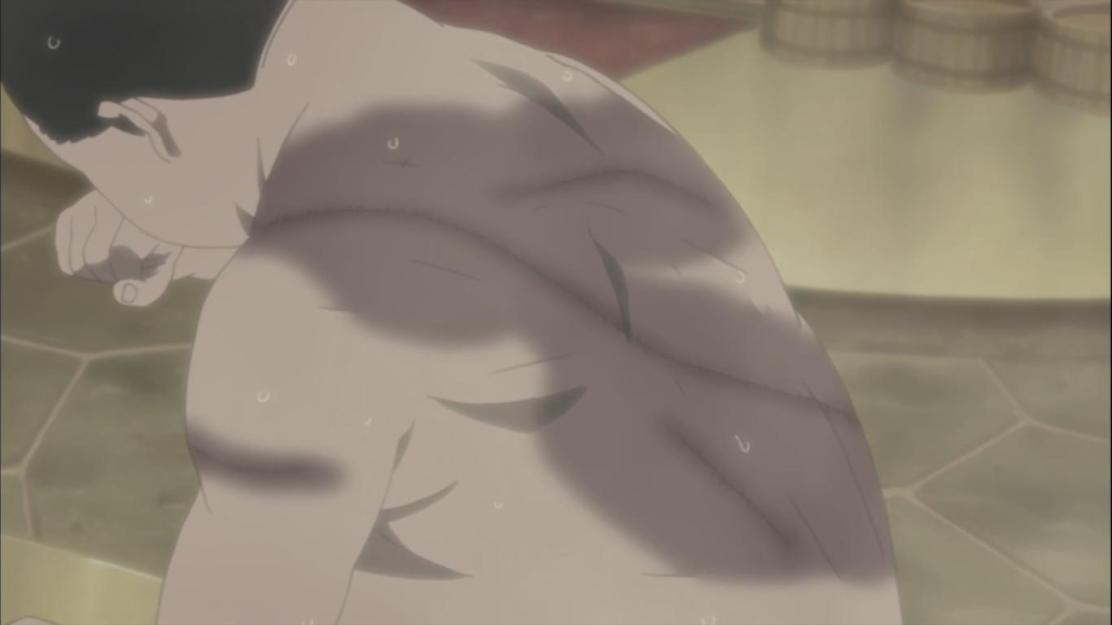 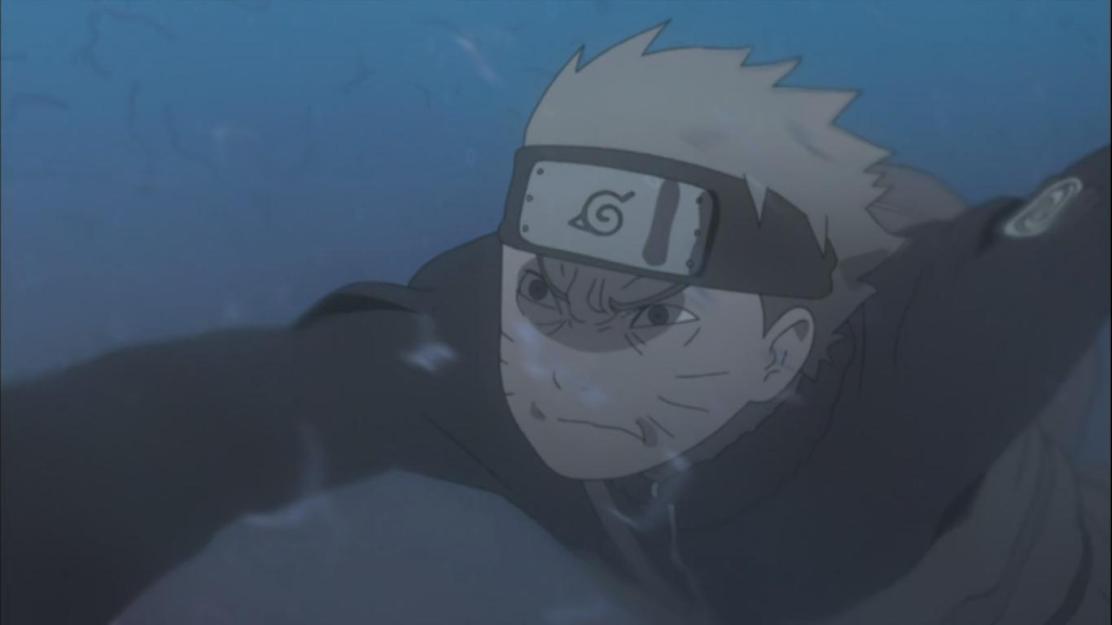 Naruto Shippuden 291 continues on from the filler episodes which seems to have made me interested in. We find out what Kabuto’s intentions could be, as he may want the Saezuri. We also find out that Naruto swallowing some of Orochimaru’s snakes could lead to his demise as well as a serious problem regarding Kurama.

Naruto Shippuden 291 begins as Kabuto watches over everything to make sure that what he’s doing is the best. Naruto is swollen by the dragon and quickly does his Shadow Clone, this bursts the dragon thing open, as he goes up the water he accidentally swallows some of Orochimaru’s snakes. He comes up and Kabuto smiles noticing what had happened.

He notices that time’s up and quickly shuts down the Edo Tensei users, Kabuto then brings large snakes out of the ground helping him to defend if any of them were to attack. Deidara appears and allows both of them to escape as he uses his smoke bombs to quickly and securely escape from that place.

We go the neighboring village where Leo and his friends are all fishing, Dokku is noticed by one of the sales man, he asks what happened in his village, he just says that it was an accident which happened there. Leo returns to Dokku with some fish, he’s happy to see that they’ve got lots of fish. Faz says that he’s got no interest in eating fish, Leo tells him that he shouldn’t be so picky. He mentions that he wants his mothers food when Leo tells him that they’re all gone!

Faz starts crying after Leo says this, they’re all interrupted by Mina as she tries to use a musical instrument to play the tune which she keeps on hearing throughout, both in school at home while she was in the Hole, but she tells them that she no longer hears it.

Naruto and Sakura go with Shiseru to the town while Sai and Yamato go with the head of the village. Sakura asks if she knows the survivors of that village, Shiseru tells that she knew him since she was a small girl. They lived together when they were kids. Naruto keeps on feeling bad, he says that he’s bloated, possibly from the snakes he ate before.

They reach a bridge, Shiseru also notices Dokku. Leo bravely crosses the bridge, Dokku sees that it’s not safe but they’re only way. He crosses with Mina, at the middle point, the wood beneath them breaks, they fall and he holds the next plank with his other hand, he notices that he cannot hold any longer.

Naruto notices, they start to fall, Naruto quickly creates his Shadow Clone, and thus is able to hold Dokku in place. After all the trouble, Dokku and the kids say sorry to Naruto and Sakura. They introduce themselves, Leo, Lando and Faz, Sora and Mina. Naruto goes to shake Mina’s hand when she see’s that a snake appears from Naruto’s hand, it was a shock which she saw but didn’t really happened.

Yamato and Sai are with the head of the village. The head reveals that he was a archaeologist who had studied the hole, he wrote in a book about and object called the Saezuri. It was created but was overcome by evil, it hated everything, it even tried to destroy the world, one of the dead picked up some of this power which turned crimson, it was enveloped in flames, after many hours, it seemed like this crimson covered in flames emerged victorious.

The crimson had turned this power into seven sounds, it then sealed it away calling it the Saezuri. From what we currently know, Mina could be the person who can unlock this power to defeat the enemy. It’s likely that Kabuto could have stolen the Saezuri. After some more talking, Yamato promises that Kabuto will be made to answer to his crimes.

We go into Naruto’s inner world where Kurama exists, we see large numbers of snakes below Naruto in his legs, we see one of them go into Kurama’s cage. Sakura wakes Naruto up telling him that they’re going to the public baths. There, Naruto shows the kids how powerful he is just by standing on water. The kids try to also stand on water.

Dokku is envious of Naruto’s popularity and his powers, Dokku tells him when he was young, he couldn’t even save a single girl. We go to girls baths where Sakura notices Shiseru’s scars, she asks how it happened. She explains she had fallen of a cliff when she was young.

Both Dokku and Shiseru explain their story of how she fell, she starts to explain that she was being dumb, Dokku tells Naruto that he didn’t participate in any sports and thus wasn’t able to pull her up. She thinks that even now Dokku blames himself  Even now they’re been brought apart, she was happy to see him after so long that it was good, she thinks that Dokku blames himself for everyone that had happened.

Yamato and Sai ask Dokku if he knows what the Saezuri is, he says that it’s an ancient writing, Yamato reveals that it’s what Kabuto wants, he then asks if Dokku knows anything about the Saezuri that could help them. He remembers a moment when Leo and Mina’s grandfather was giving both of them silver sticks, he reveals to him that he shouldn’t tell anyone about this. Dokku tells Yamato that he doesn’t know anything.

Yamato tells Dokku that the children who were rescued are able to stay in the village, they can be adopted by the village itself and stay there. Both Dokku and Shiseru look at the kids as they sleep. Dokku mentions that it’s the first time they’ve been happy for a long time since the night they were invaded. We see Shiseru go to hold Dokku’s arms.

We then see Kabuto repairing his tags in which he put into Deidara and Hidan. At the same time he’s talking to someone , he mentions that he didn’t have to kill all of them, the person replies on Kabuto’s paper saying that it was fun. Kabuto then goes on to mention that he’s improved the jutsu technique by adjusting it to his chakra, now he has more control.

The person mentions that he still doesn’t have enough, there might be someone who has it, Kabuto asks him if this is his next order, Kabuto mentions that he’s fine with it because Kabuto’s also got some experiments going, especially seeing what happens to Naruto. He’s currently sweating while he’s sleep, seems like he’s not okay. Naruto Shippuden 291 ends here.

Great addition to last week’s chapter, it’s definitely getting more and more interesting but seems like I have to write quite a lot each time. Oh well, I do like anime, and can’t wait for next week’s Naruto Shippuden 292 titled “Power – Episode 3”, when they all go to beach, they remember some memories of their parents, plus Naruto seems like he’s taken over by all the snakes.