This blog post will allow you to see which character within the Bleach Anime/Manga series has changed their look, it will round out the thing you need to know about how each characters looks after the 17 Month gap in the story. This post was a request by a usual to Daily Anime Art who visits us most days,  Thanks Linus135. 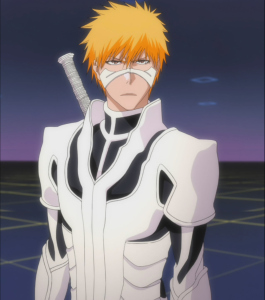 Ichigo’s Fullbring Form: Ichigo’s Fullbring powers came during his training with Xcution, which included Ginjo, Riruka, Yukio, Jackie, Giriko and Tsukishima. This new look for Ichigo resembles his New Bankai and New Shinigami looks as It has some features which make it somewhat similar. His Fullbring is very different from other Fullbring Users for example, Yukio with his Games, and Jackie with her Dirty Boots. As described by Chad, Ichigo’s powers have always been about what he wears, for example with his Bankai, the amount of cloths that remains is equivalent to the amount of power he has at that time, until he is left to recover. After Ichigo’s Fullbring is fully completed, his Fullbring transforms into a solid outside. He gains a white armor covering his arms, chest, shoulders and feet while a stripe runs across his face. Underneath this he wears a completely black bodysuit. A Short sword grows from his badge which he hands across his back. This sword also changed the marking on his Shinigami badge.

Ichigo’s New Shinigami Look: After Ichigo lost his Fullbring powers when he lost it to Ginjo, Rukia had helped him as she stabbed him with a special sword. This transformed Ichigo into this new Shikai form which personally, he looks bad-ass. After the old Shikai of Zangetsu, the appearance changes now, giving the blade a silver hilt with gray-wrappings and a short length of chain at its base. The blade itself becomes slightly reshaped, curving inwards at the backside of the tip similar to a trench knife. When stored away on Ichigo’s back, the former cloth will materialize to still act as an impromptu sheath. 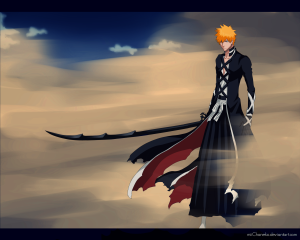 Ichigo’s New Bankai Look: Ichigo’s previous Bankai was awesome, but after I saw this! This is just EPIC! This form was shown when Ichigo was in battle with Ginjo. He opened this form so he could quickly get rid of Ginjo. As some remaining traces of Ichigo’s Fullbring was still within him, the appearance of his Bankai changed. He wears a white undershirt beneath his black shihakusho, which is now open. Held together by three “x”-shaped marks, it ends in a number of coattails. Ichigo wears black gloves with white “x”-shaped marks appear on both the gloves and his forearms. Tensa Zangetsu’s blade is now much longer (roughly the length of his Shikai) and more curved as it nears the tip, with three protrusions along the blunt end of the sword close to its tip. While retaining its manji-like shape, the tsuba becomes more curved and jagged. Tensa Zangetsu’s chain is now longer, attaching to both the base of the sword’s hilt and to Ichigo’s glove, forming a wide loop. 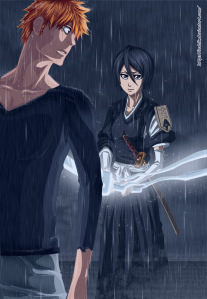 Rukia’s New Look: Rukia appears with Urahara and Isshin when Ginjo and Tsukishima succeed in stealing Ichigo’s Fullbring abilities. Rukia stabs Ichigo using the while sword which has other Shinigami’s powers. When she stabs Ichigo in the chest from behind, Ichigo is once again able to see her as she materializes. At this  time she has a new haircut. She is wearing a lieutenant badge for the Thirteenth Division, as she has been promoted within the Gotei 13. Personally, Rukia hasn’t changed much, except for her hair, she has gained a new glove which stretches from her hands to her biceps areas. This could just be a temporary look, or might stay. 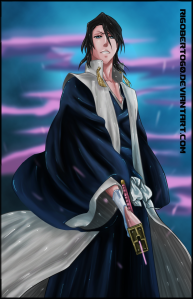 Byakuya’s New Look: He was among the people who placed their energy into the while sword who was prepared by Urahara which was intended to help restore Ichigo’s Shinigami Abilities. After Rukia stabs Ichigo, Byakuya exits a Senkaimon with several Shinigami such as Zaraki and Renji. Byakuya wears his kenseikan at the back of his head, he also wear a variation of captain haori with a high collar which has a light gold on its edges and small, light gold tassels attacked to the corner. Furthermore, Byakuya no longer wear his scarf, due to the collars. As seen in the image on the left, you can see that most of his other cloths still look the same before the 17 Month gap during Ichigo’s fight with Aizen. 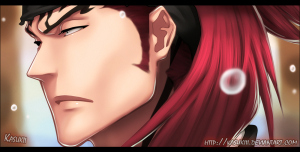 Renji’s New Look: He was present when Rukia was ordered to observe Ichigo during his time with Xcution and Ginjo. He came out from the Senkaimon with other Shinigami’s such as Zaraki and Hitsugaya. When Renji arrives he looks like a real bad-ass as he’s a lot more calm. Renji has now got a black headband instead of a white one which he usually has. Also, his hair style may have changed a little from his last form as now he uses his headband to hold the back of his hair. Furthermore, Renji’s hair has grown longer, plus he has long dark straps on each wrist with bandages over his arms. 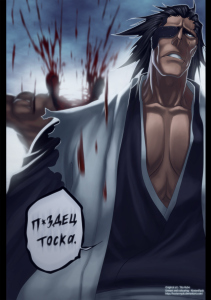 Zaraki’s New Look: When he arrives, after Ichigo was stabbed by Rukia, we see Zaraki’s New Look. When the Shinigami’s are separated we finally see that Zaraki’s look hasn’t changed much. All his cloths are still the same. Except for his eye patch which he covers his right with. His old eye patch had straps which connect at the back of his head, however in this new look, Zaraki’s new patch seems to be just a strap on which he puts in. His scar still exists on his left eye. Furthermore, before, the tips of his hair had bells on. Now his hair doesn’t seem to have any bells. At this point, Zaraki looks a lot more calmer as he seems to be getting bored. He probably hasn’t fought any strong opponents in a long time. 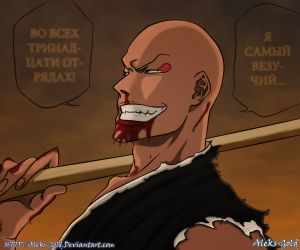 Madarame’s New Look: Madarame is probably the characters which has had the least change. Although he has gained a gold-colored shoulder armor with a Kanji for ‘dragon’ on it. Madara has also gotten a lot more spirit as well as fair during fights as he makes sure that Moe, his opponent, is able to know what he’s getting into when he got into a fight with Ikkaku. Plus he seems a lot more chilled out as well as cool. 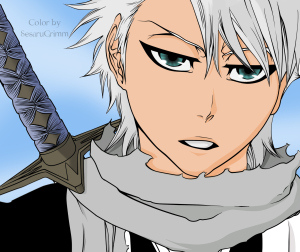 Hitsugaya’s New Look: A year and a half after Aizen’s defeat, shortly after Ichigo regains his Shinigami powers when Rukia stabbed him with the white sword, Toshiro appears sporting a hairstyle similar to that before he became a Shinigami, and a long turquoise scarf. His green sash is also changed to a thin chain, but it still retains the star-like clip. Furthermore his hair has grown longer, while he’s stayed the same height. 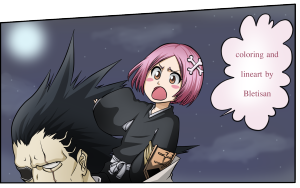 Yachiru’s New Look: She only appeared for an instant when she was with Zaraki during his fight with Giriko. She is very small, young girl with pink hair, dark pink eyes and a perpetual blush on her cheers. Here, in the image on the left, Yachiru’s hair is flatter and has a cross-bone hair-clip on her left side. She hasn’t changed a lot. 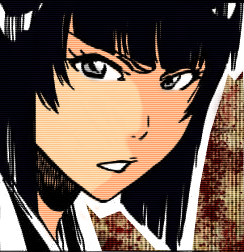 Soi Fon’s New Look: She is first introduced when Ichigo goes to Soul Society to get Kugo Ginjo’s Body back so he could have a proper burial since he was then taken by the Shinigami’s. Soi Fon looks very similar to before however as you can see in the image, her hair does not go outwards as much as before. Her hair is a lot more straight.  Everything else looks very similar, so there isn’t much to comment on when it comes to Soi Fon’s looks. However I think as we see more, her appearance will change.

Shinji’s New Look: Shinji is first seen during the last chapter of the Substitute Shinigami Arc, he talks to Ichigo as he wants to stop Ichigo taking Ginjo’s body back, since he doesn’t see him as a criminal and a murderer. Shinji returns to this attire with the addition of wearing his tie tucked under his robes. His hair which he kept it a short, straight-line cut after becoming a Visored has remained basically the same as well, with the exception of the bang now having a more asymmetrical cut with the left side being longer than the right. 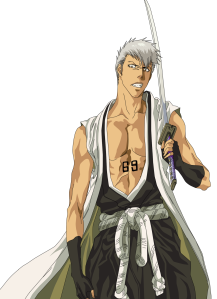 Kensei’s New Look: Ichigo first saw Kensei when he went to the Soul Society where he met other captains. Kensei lead him to Captain Yamamoto as they wanted to talk to him about his actions. He wears a sleeveless shihakusho that was open on the front before, which is closed now. It exposed his chest and tattoo. He also wore a sleeveless haori and a pair of fingerless black gloves that covered most of his forearms. He now wears a  new metallic belt and mussed up hair. It also seems as thought he has also been going to the gym as he looks a lot more hench then before.

Thanks for reading this long winded blog post. Hopefully, you’ll subscribe to the blog. If you think I’ve missed out anything detail, please do post and tell me which bit and I’ll be more then happy to add it. Thanks.